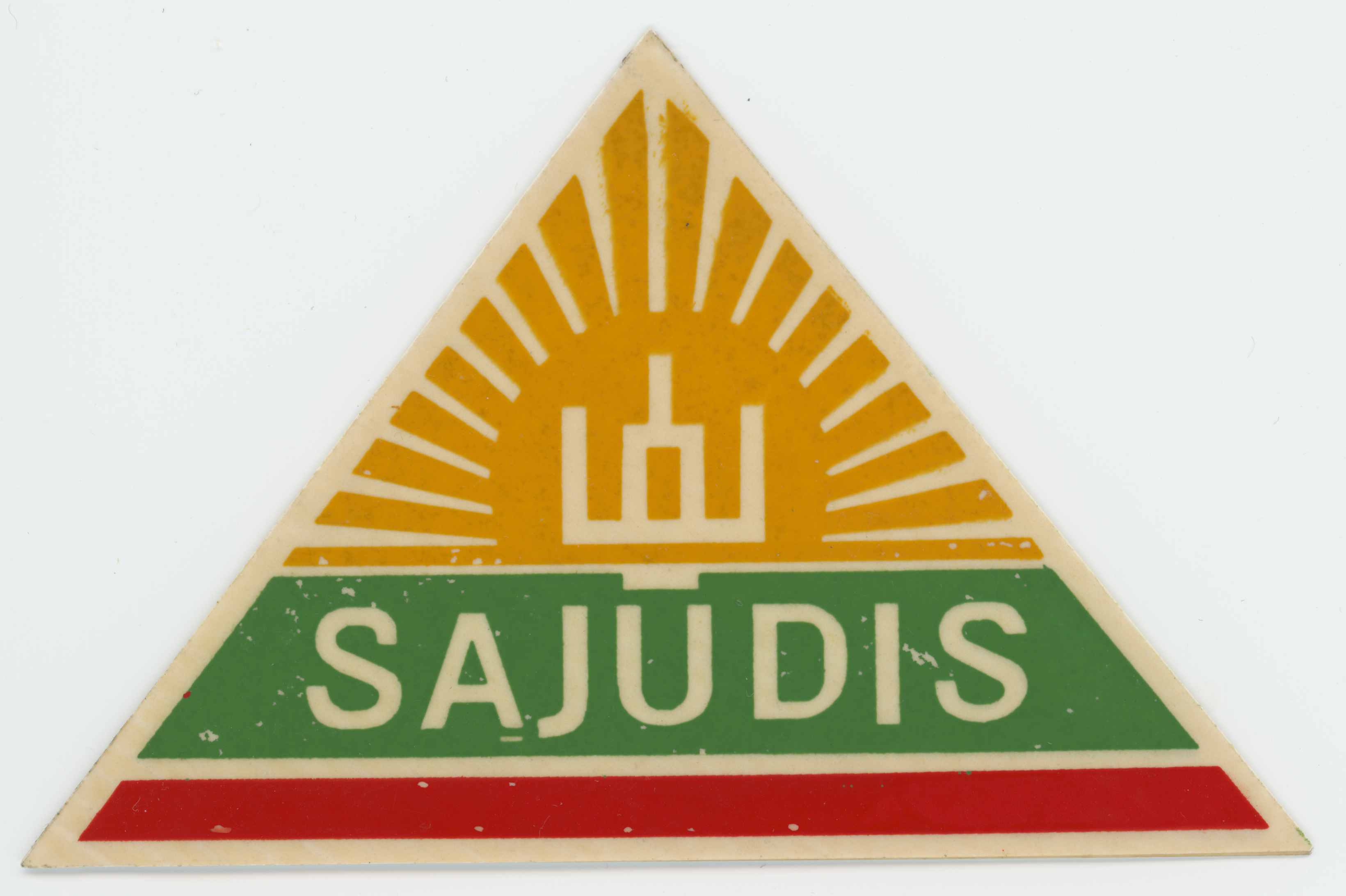 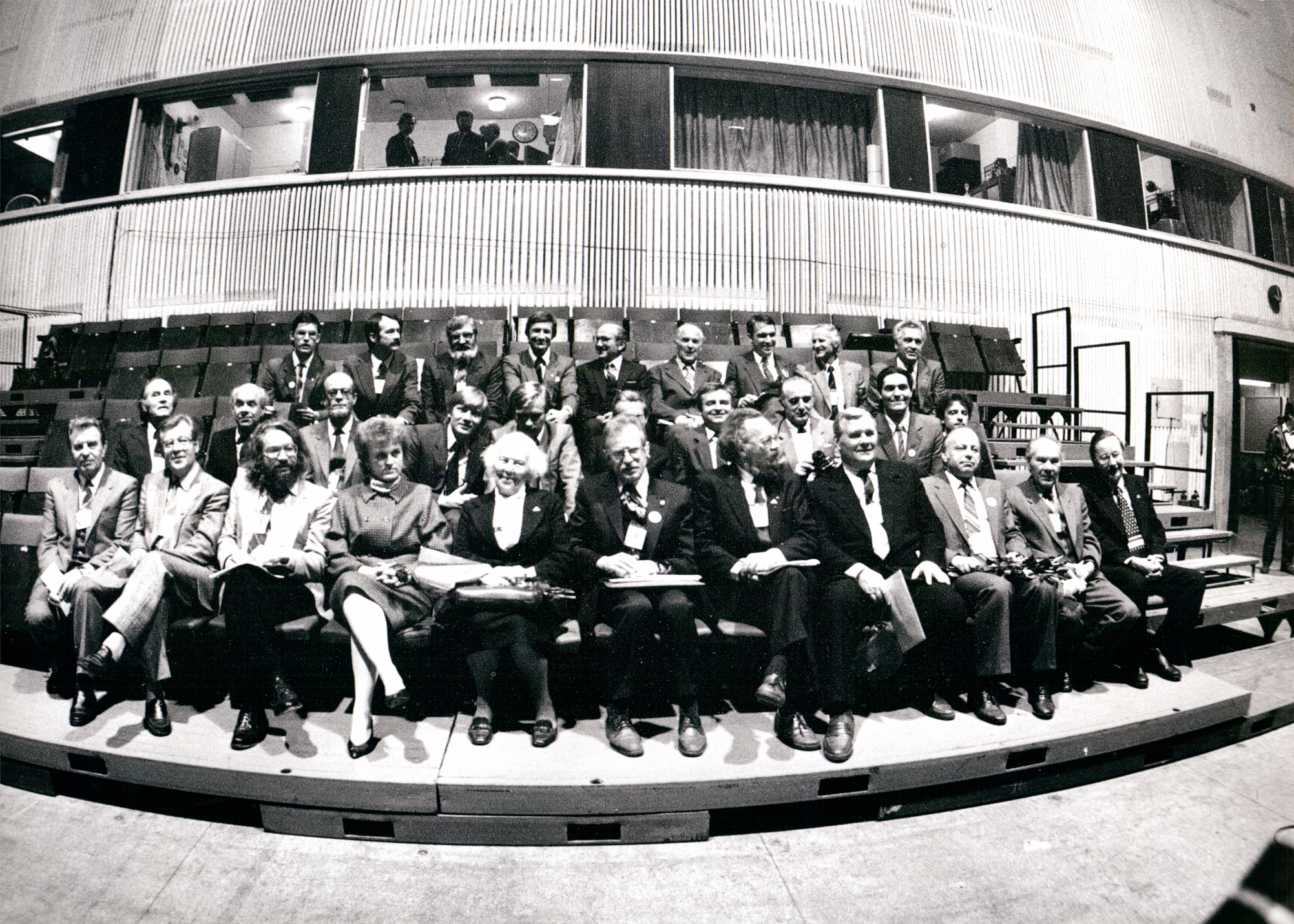 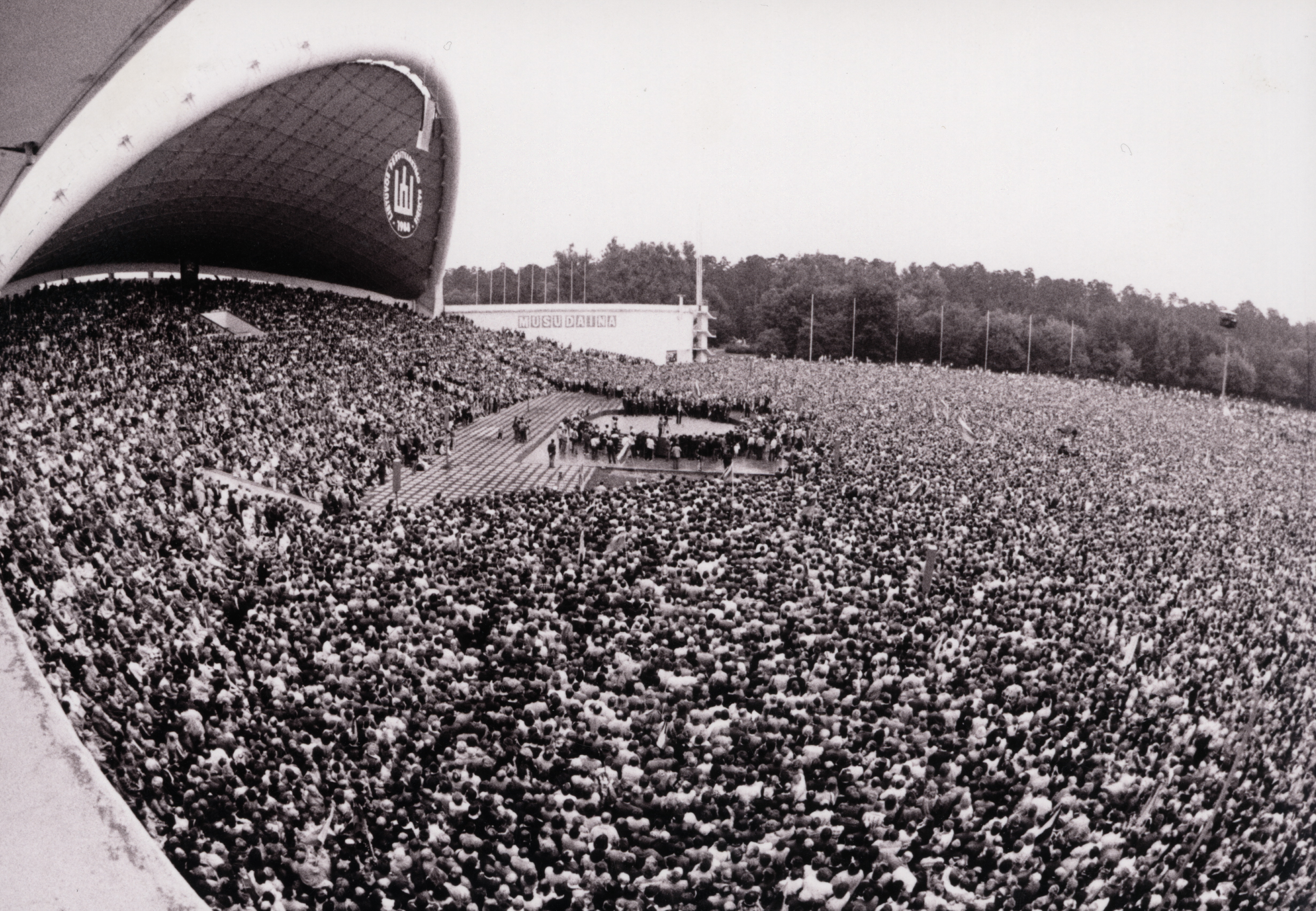 A rally organized by Sąjūdis to commemorate and condemn the Molotov-Ribbentrop Pact, in the occasion of its 49th anniversary. Vilnius, Vingis Park, August 23, 1988. Lithuanian Central State Archives. 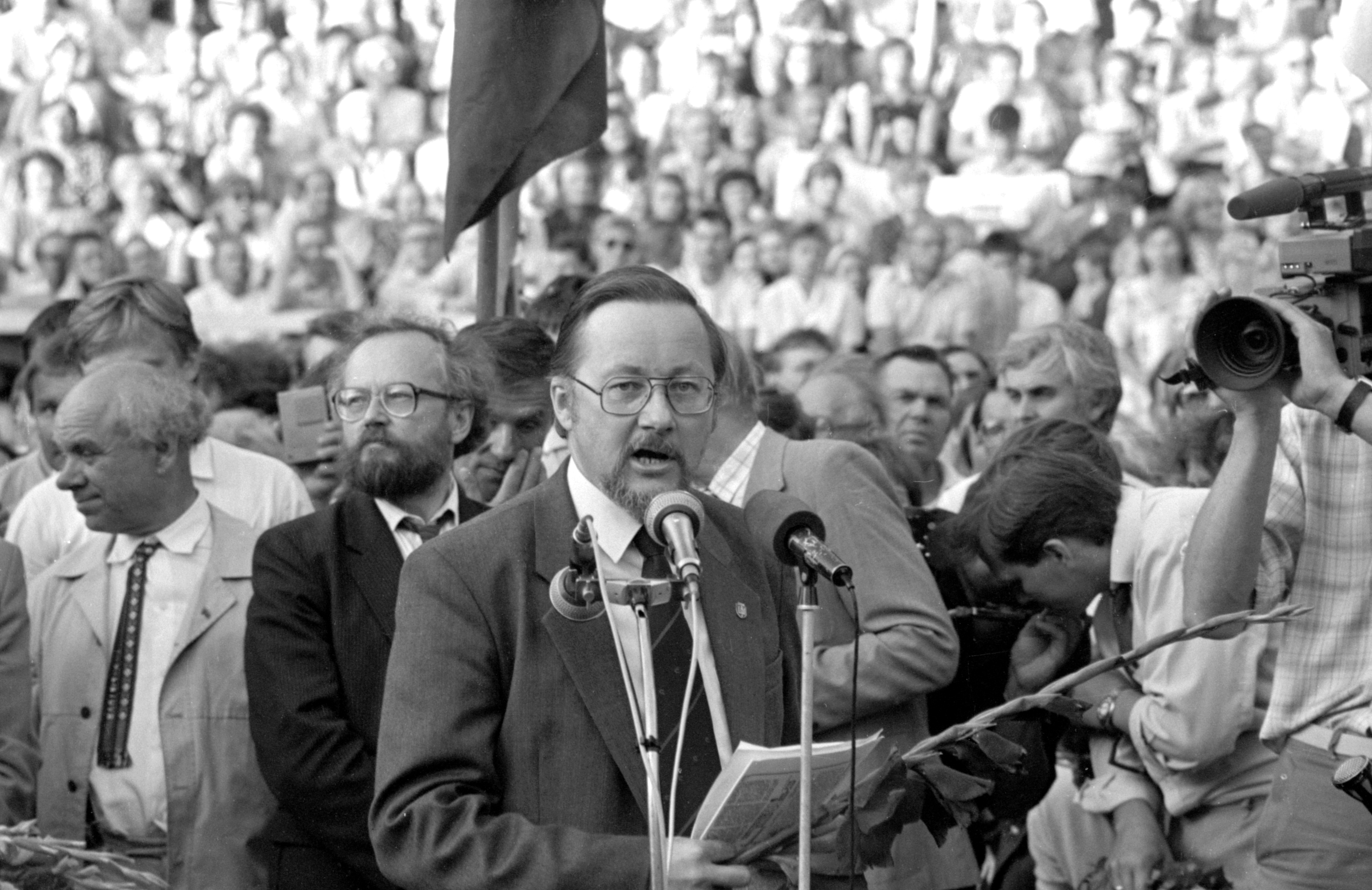 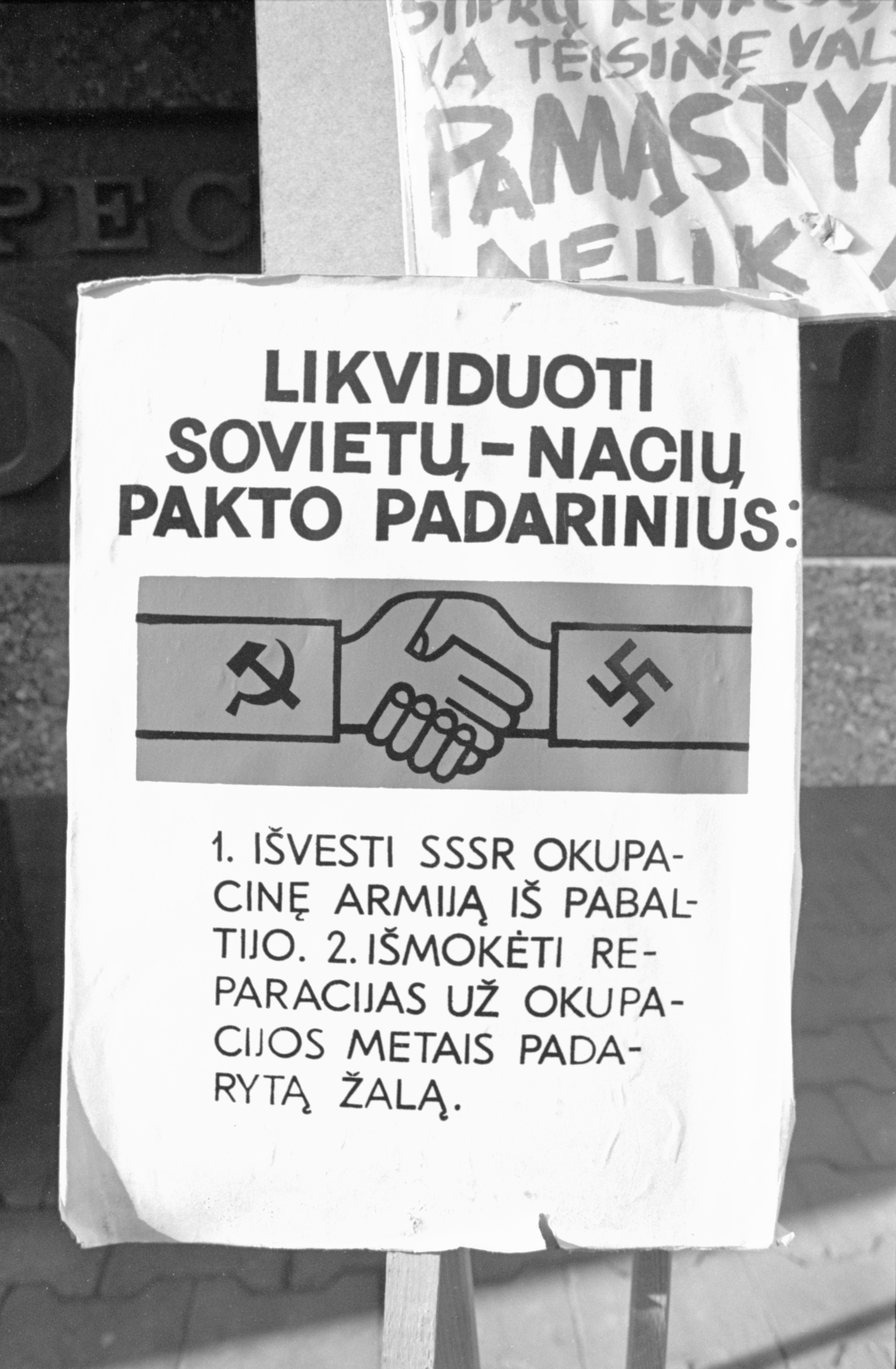 Picket organized by the Supreme Council of the LSSR. The poster says: ”In order to eliminate the consequences of the Soviet Nazi Pact: 1. Withdraw the occupying USSR army from the Baltics. 2. Pay reparations for the damage caused during the occupation”. Vilnius, May 18, 1989. Photographer Algimantas Žižiūnas. Lithuanian Central State Archives.

Numerous activities performed during the Singing Revolution revolved around the Reform Movement of Lithuania (in Lithuanian: Lietuvos Persitvarkymo Sąjūdis), or briefly Sąjūdis (“movement”). This was a group of 35 intellectuals and artists established in June 3, 1988 to support the perestroika and glasnost processes. Conceived as a way to modernize USSR and soften its policies, the perestroika had for many Soviet countries the boomerang effect of re-awakening the national consciences, and became one of the main catalysts for the various independence movements throughout the Union.
Indeed, after the initial support to perestroika and glasnost, Sąjūdis soon replaced its action with specific claims on national independence, including restoring the Lithuanian language, conducting campaigns of environmental protection, revealing facts and documents about Stalinism and Nazi-Soviet agreements, and others.
In the turn of few months, Sąjūdis became the locomotive of the independence movement in Lithuania. His leader was a pianist and musicologist, Prof. Vytautas Landsbergis and the whole group was packed with musicians, poets, writers, academics and, yes, some politician too. In the group there was also Algirdas Kaušpėdas Sąjūdis, lead singer of the band Antis and main organizer of the Rock March. Sąjūdis organized a number of rallies and meetings, and delivered official and unofficial statements that put increasing pressure on Moscow. Arguably, the most significant one occurred on August 12, 1988: in the occasion of the 49th anniversary of the Molotov-Ribbentrop Pact, Sąjūdis organized a political demonstration rallying about 250,000 people in Vingis Park, Vilnius. Vytautas Landsbergis and other Sąjūdis politicians, artists and intellectuals addressed the main claims of the movement and other political and historical key-issues related to the Molotov-Ribbentrop Pact and the Soviet occupation. During the meeting, the Lithuanian national anthem “Tautiška giesmė” was sung by the entire crowd.
Among the achievements of Sąjūdis, one shall mention at least the publication of the Secret Protocol of the Molotov-Ribbentrop Pact in August 1988, one year and half before Gorbachev finally admitted its existence; the establishment of a multi-party system that led to the first free elections in February 1990 and of course the Act of the Re-Establishment of the State of Lithuania, by which Lithuania became the first Soviet Republic to declare its independence from the USSR. After independence, Landsbergis became the first president of the Lithuanian Republic. 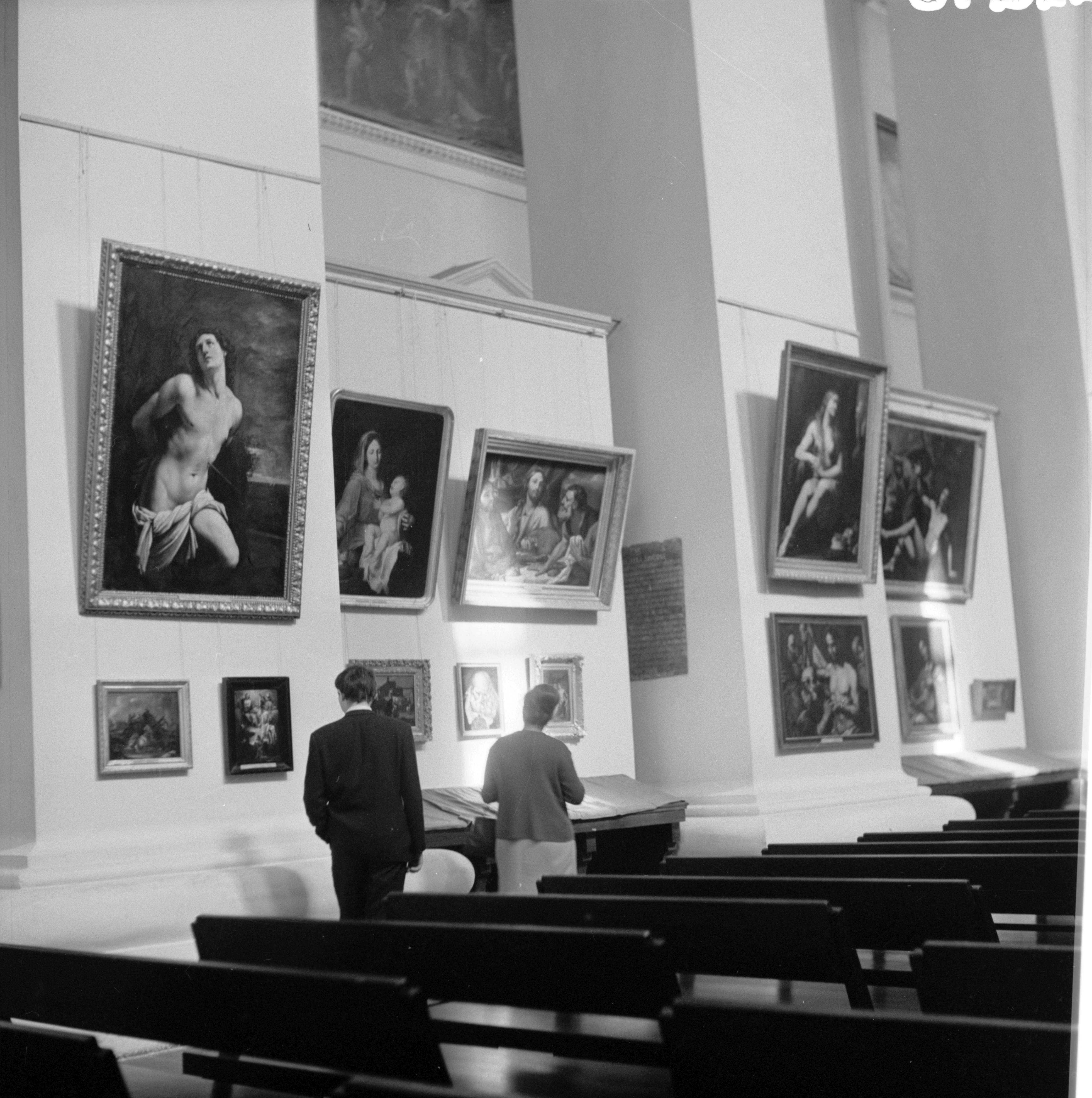 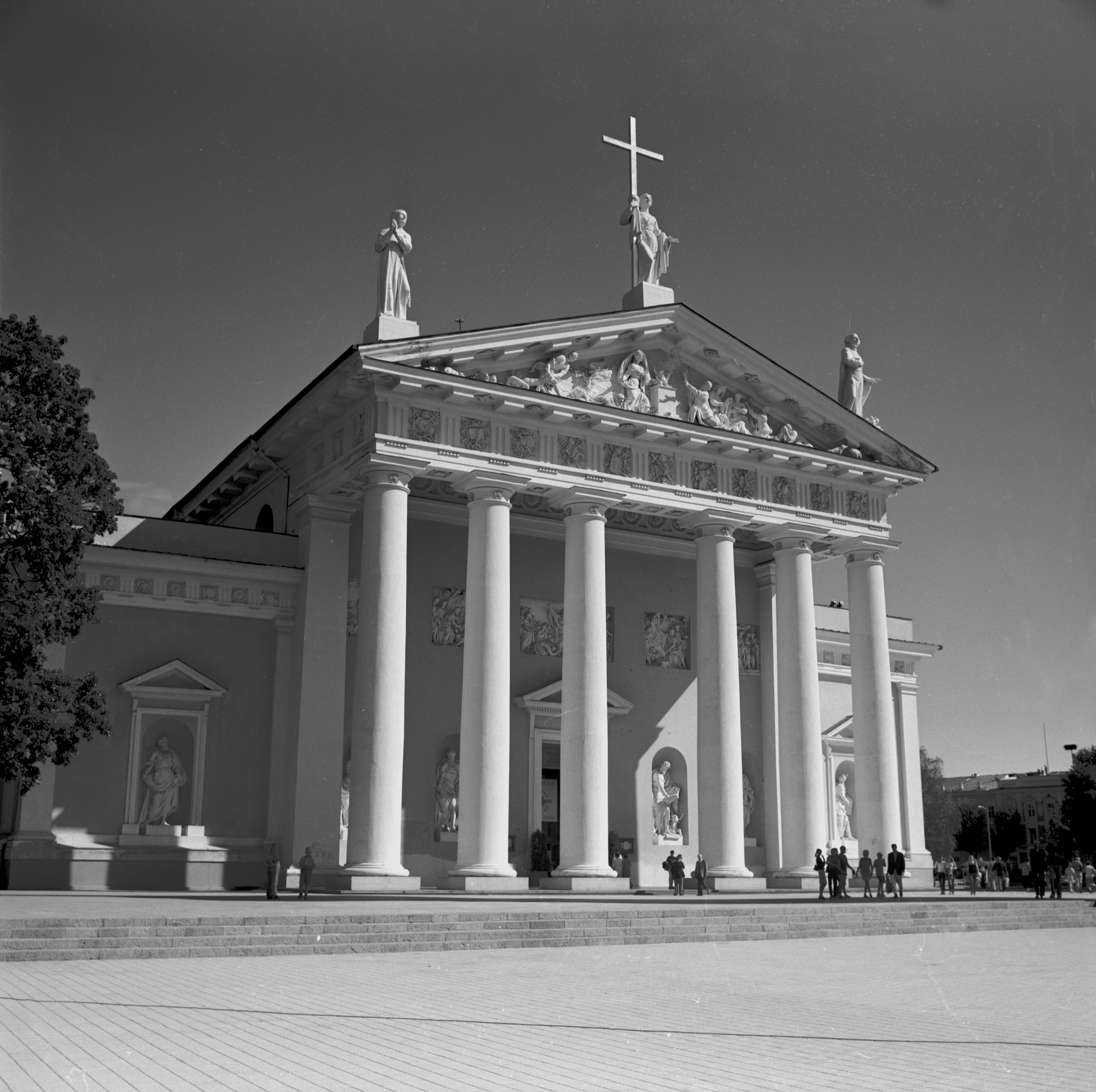 The crowd in cathedral square, after the mass celebrating the restitution of Vilnius cathedral to the catholic community. VIlnius, 1988. Photographer Gediminas Svitojus. Lithuanian Central State Archives. 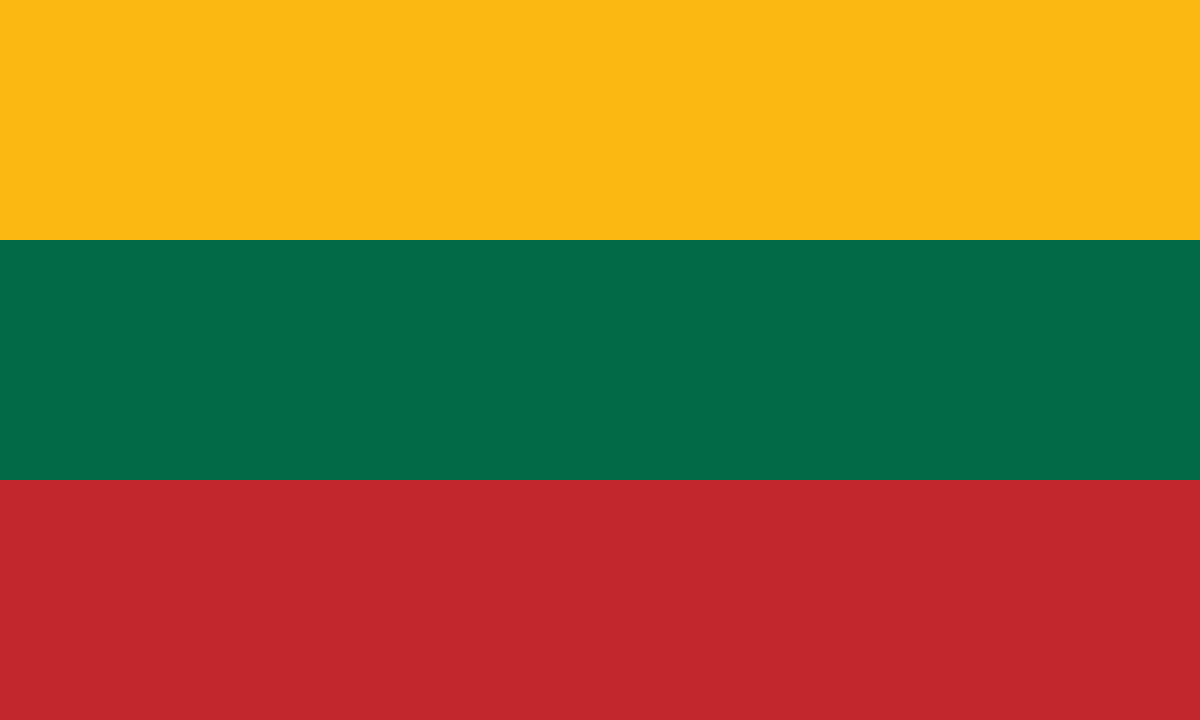 An important component of the Soviet strategy of subjugation towards the occupied states was the removal or denial of national symbols and cultural items. Language, flags and anthems were among the most visible forms of history rewriting, but another important one targeted all the items (symbolic or tangible) related to religion: the Communist ideology, notoriously, promoted atheism, so religious rites got prohibited and churches and monasteries reconverted into other functions, including warehouses and exercise rooms.
It was thus a significant sign of the fast-changing times the facts that, towards the end of 1988, numerous religious buildings were restored in their original function. On October 21st, in particular, the most important church in Lithuania, the Cathedral of Vilnius, ceased to be used as an art gallery, and was returned
to the Catholic community. On November 18, then, the national anthem of Lithuania, “Tautiška giesmė” (literally “national anthem”) and the traditional national Tricolore flag were legalised, replacing officially the anthem and the flag of the Lithuanian Soviet Socialist Republic. 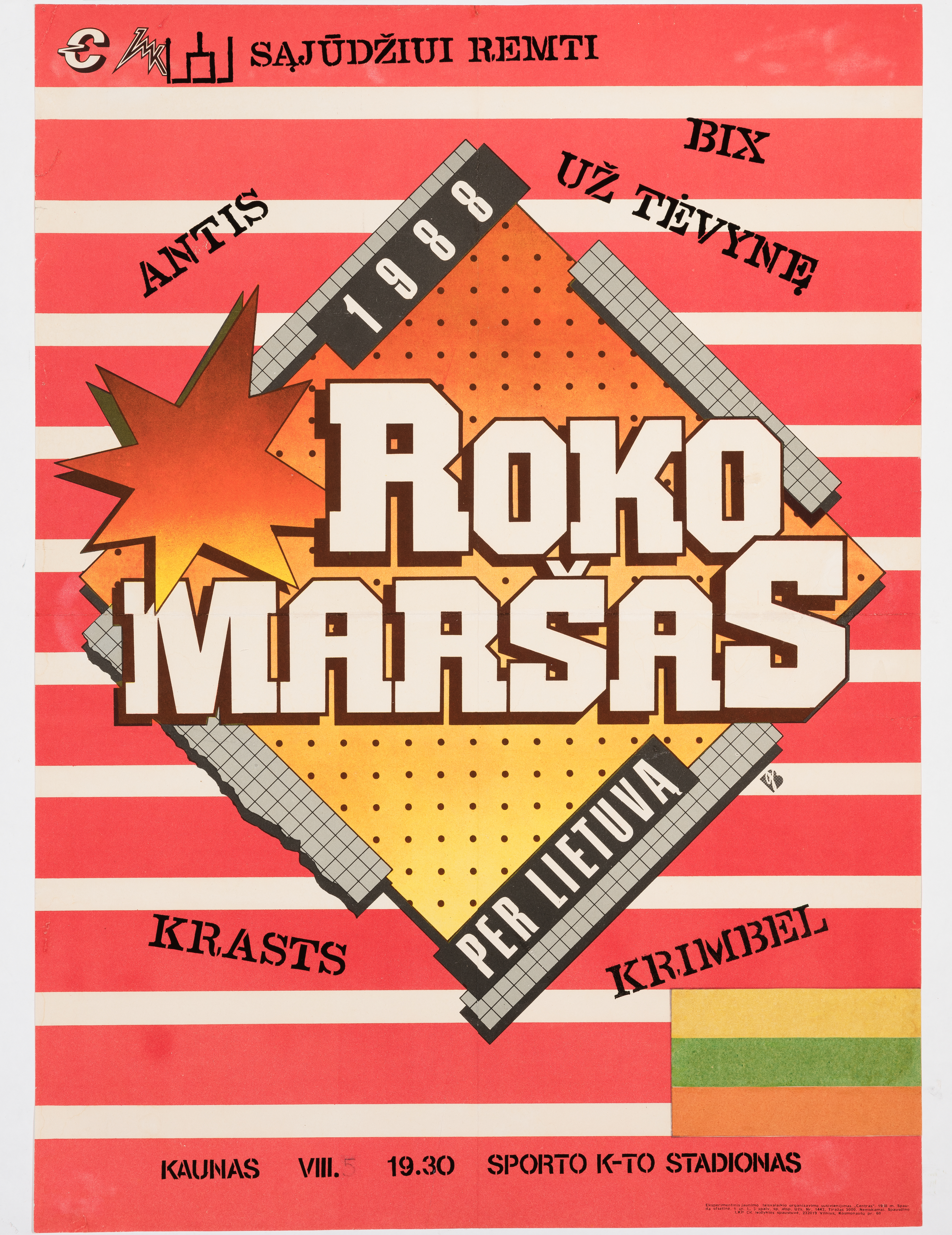 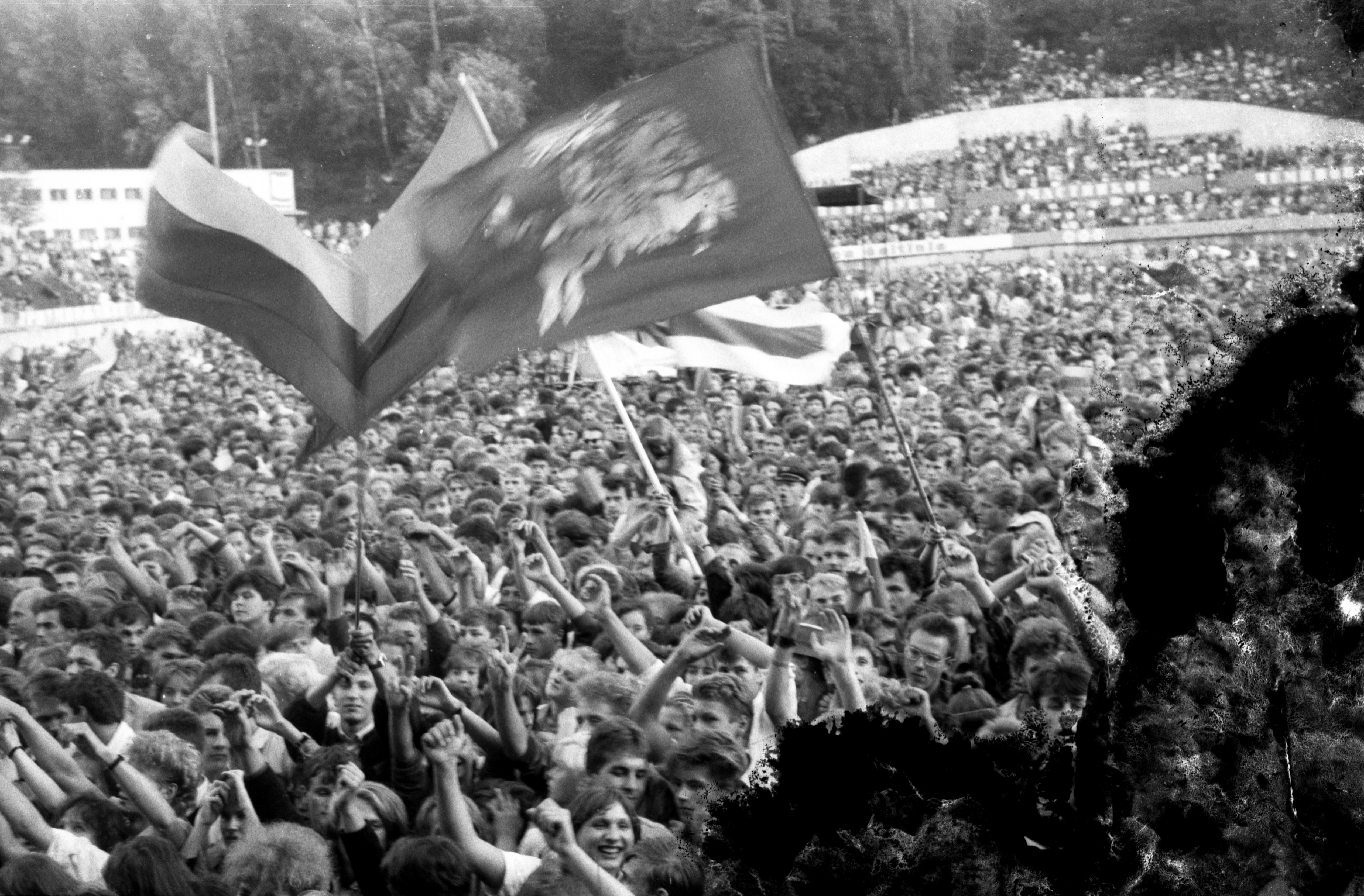 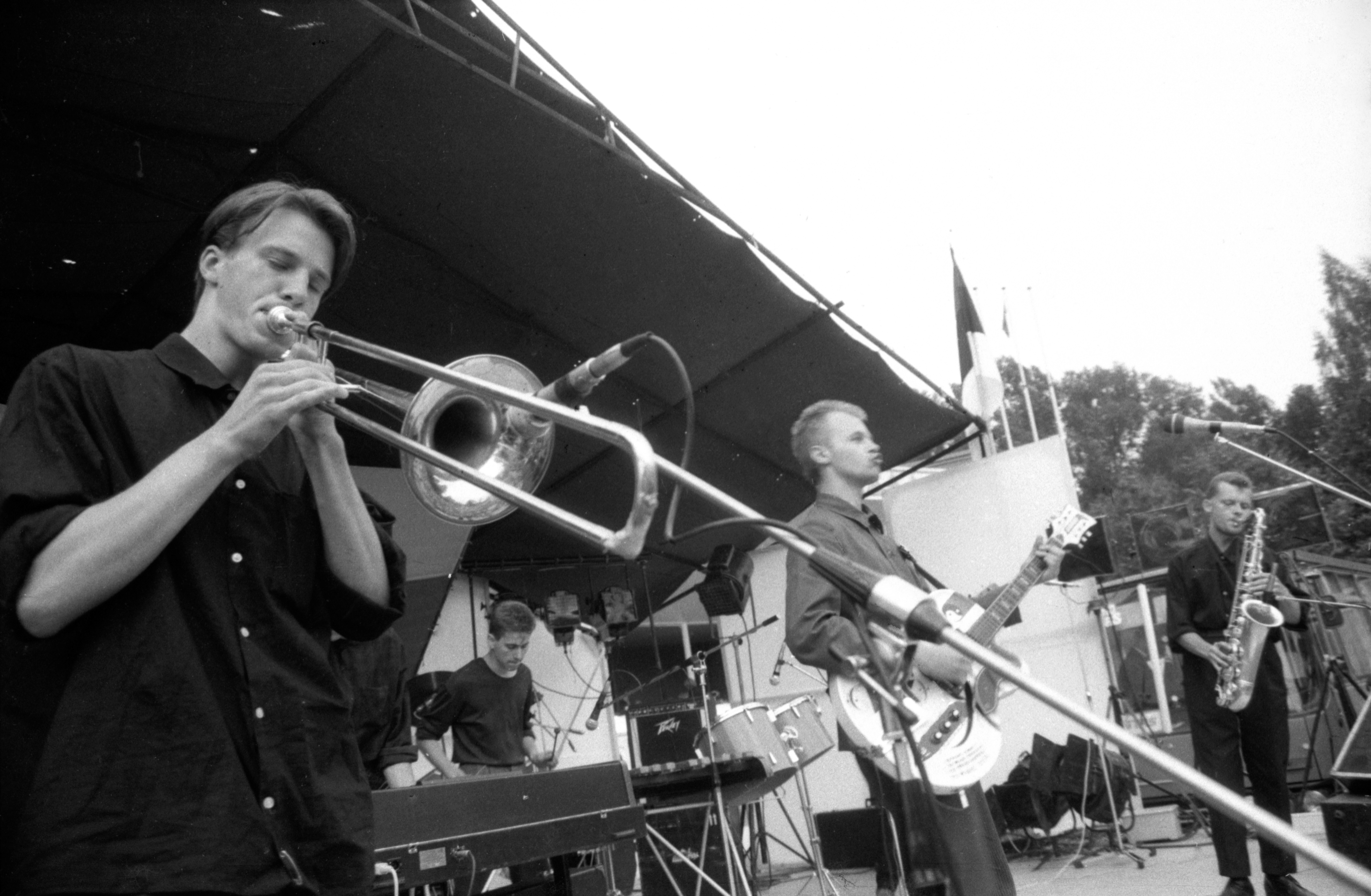 Bix on the stage during the Šiauliai leg of the Rock March, 1988. Photographer Viktoras Kapočius. Lithuanian Central State Archives.

Encouraged by the formation of Sąjūdis, a second edition of the Rock March was organized, this time with the intent of making the independentist claims more explicit. The performers openly displayed the Lithuanian flag, and on the stage some political speeches were delivered too, particularly by writer and philosopher and Sąjūdis member Arvydas Juozaitis, who – among others – touched the painful topic of the Soviet mass deportations of Lithuanians.
This second march started in the town of Biržai, and then toured in Šiauliai, Mažeikiai, Tauragė, Kėdainiai, Klaipėda, Kaunas and finally Vilnius. On the stage the Lithuanian bands Antis, Bix (these two already present the year before), JMK folkloro grupė NAMO, Už Tėvynę and Savaitgalis; the Latvian Krasts and the Estonian Krimbel. 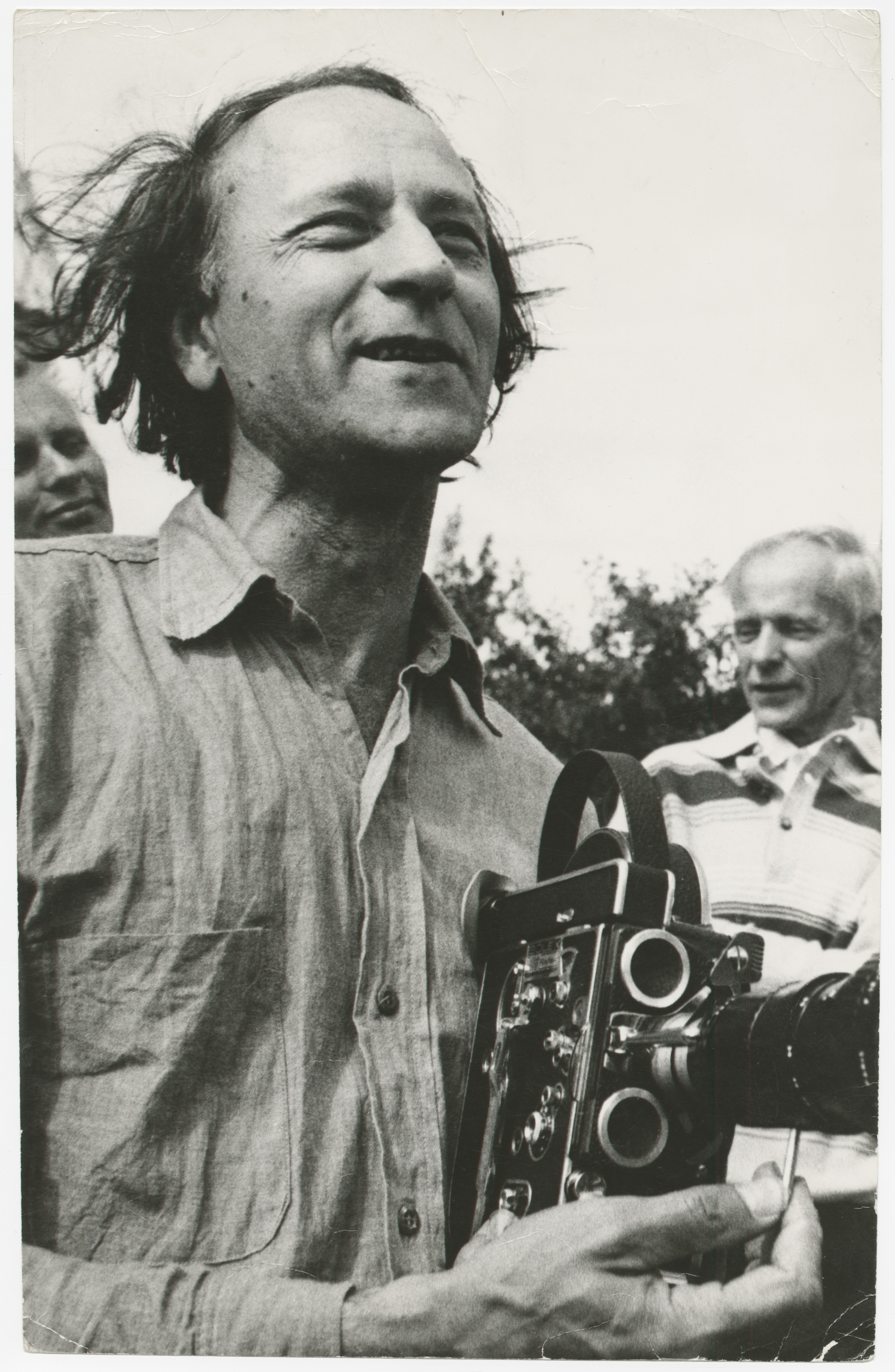 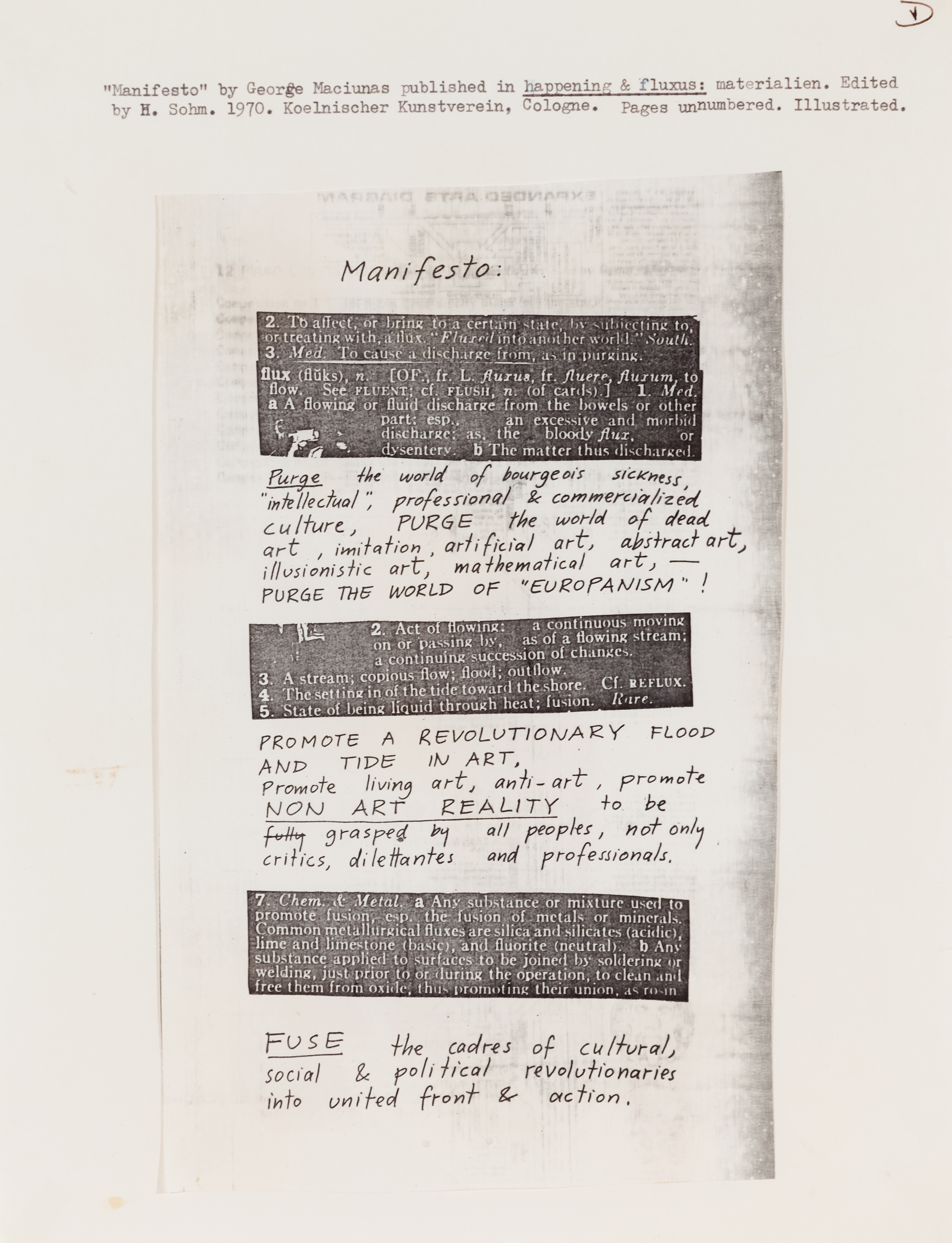 The Fluxus manifesto, written by George Mačiūnas. Note the entry ”Fuse the cadres of cultural, social and political revolutionaries into united front and action”, which perfectly embodies the spirit of the Singing Revolution. Jonas Mekas Visual Arts Center. Veterans and the Train” on the Anykščiai Happening
REVOLUTION AS ARTISTIC GESTURE: FLUXUS

Fluxus was an artistic movement filled with revolutionary ideas for arts and society, that proved to be an important inspiration for the Baltic independence movements. Established in America, and usually known because of Yoko Ono’s and John Lennon’s involvement, at the time of their pacifist campaigns, Fluxus had a strong connection with Lithuania through its founder Jurgis “George” Mačiūnas (who also coined the term “Fluxus”) and one of its leading figures Jonas Mekas.
One of the entries of the Fluxus manifesto was, prophetically, “Fuse the cadres of cultural, social and political revolutionaries into united front and action”
Vytautas Landsbergis, the leader of Sąjūdis, was also a member.
In Lithuania, during the Singing Revolution, Fluxus organized or inspired a number of significant events (often called “happenings”), in which thought-provoking and not rarely humorous artworks and performances would often target, sometimes subtly sometimes deliberately, the ongoing political situation and, more in general, questions of artistic and individual freedom, against the preset aesthetic dogmas imposed by the Soviet regime.
Fluxus or Fluxus-inspired events had been organized since 1985 (with the Youth Festival “Chamber Music Days”), but 1988 possibly represented the peak, since it marked the first edition of the Happening Seminars in Anykščiai and Nida and of The Alternative Music Festival in Kaunas, and the second edition of the Free Sound Sessions in Vilnius, Panevėžys and Kaunas. 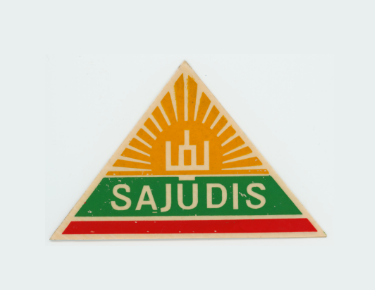 35 intellectuals and artists form the Reform Movement of Lithuania “Sąjūdis”, the main political force that will eventually lead Lithuania to independence. 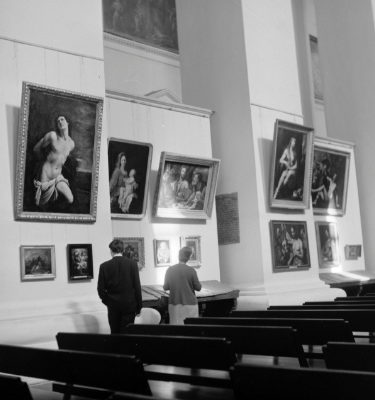 During the Autumn of 1988 some important national symbols are restored after they had been closed or forbidden for decades. 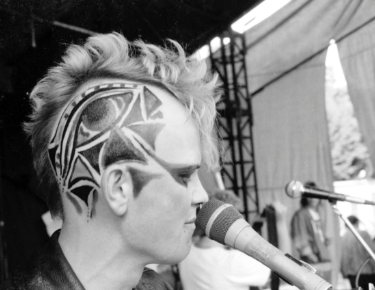 The second edition of the "Rock March" starts in Biržai, on July 28. It features five bands from Lithuania, one from Estonia and one from Latvia. 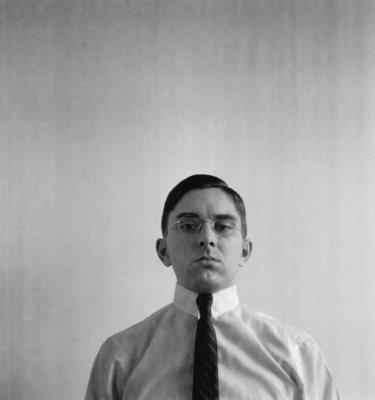 Among the driving forces of the Singing Revolution, there is also Fluxus, an artistic movement founded by Lithuanian artist George Maciunas.