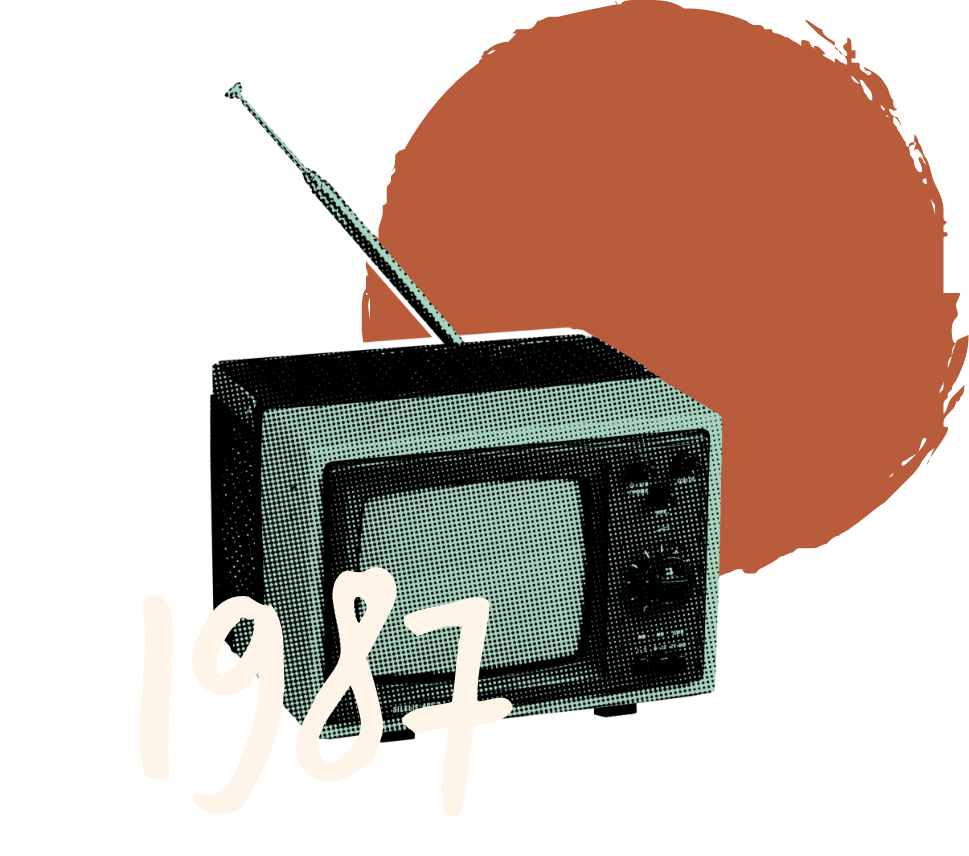 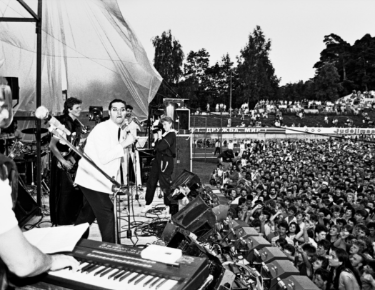 The first edition of the «Rock March» (in Lithuanian: Roko maršas) starts in Vilnius. Dates in Kaunas, Tauragė, Kėdainiai, Šiauliai and Klaipėda follow. Ideally, it is the beginning of the Singing Revolution in Lithuania.

In the occasion of the 48th anniversary of the Molotov–Ribbentrop Pact, the Lithuanian Liberty League organizes a public protest rally. For the first time there are no arrests from the Soviet authorities. 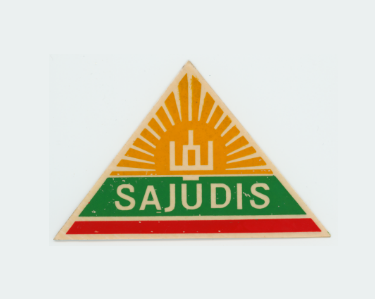 The Sąjūdis Initiative Group (in Lithuanian: Sąjūdžio iniciatyvinė grupė) is established during a meeting at the Lithuanian Academy of Sciences. It is composed by 35 communist and non-communist intellectuals and artists and it aims at organizing the Sąjūdis Reform Movement, or simply «Sąjūdis». Pianist and musicologist Vytautas Landsbergis becomes the movement’s leader.

The first Sąjūdis gathering is organised, announcing its program and goals.

The Sąjūdis newsletter publishes the Secret Protocol of the Molotov-Ribbentrop Pact, exposing the sharing of territories between Nazi Germany and Soviet Russia. The Protocol had been and will be denied by the parties interested until 1989, when Gorbachev will finally admit its existence. 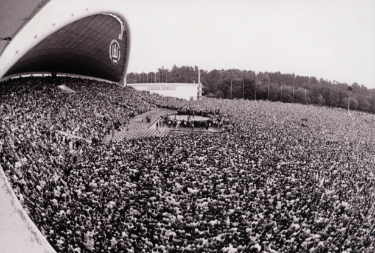 A rally organized by Sąjūdis to commemorate and condemn the Molotov-Ribbentrop Pact, in the of its 49th anniversary. Vilnius, Vingis Park, August 23, 1988. Fotografas nenurodytas. Lietuvos centrinis valstybės archyvas

In the occasion of the 49th anniversary of the Molotov–Ribbentrop Pact, Sąjūdis rally about 250,000 people in Vingis Park, Vilnius. Sąjūdis representatives address the main claims of the movement. During the meeting, the Lithuanian national anthem is sung. Numerous other rallies follow in the next few months and years. 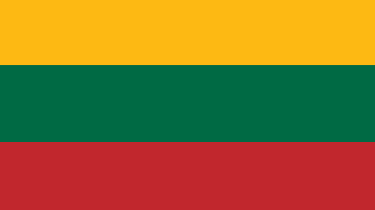 Some important national symbols are restored after they had been closed or forbidden for decades, including Vilnius Cathedral, the Lithuanian flag and the Lithuanian anthem.

During its national assembly in Kaunas, Sąjūdis calls for the re-establishment of a democratic and independent Lithuanian state.

The Lithuanian Supreme Soviet issues a declaration of self-determination and restoration of state sovereignty for Lithuania.

The third edition of the «Rock March» starts in Kaunas. Dates in Klaipėda, Mažeikiai, Šiauliai, Panevėžys and Vilnius follow. 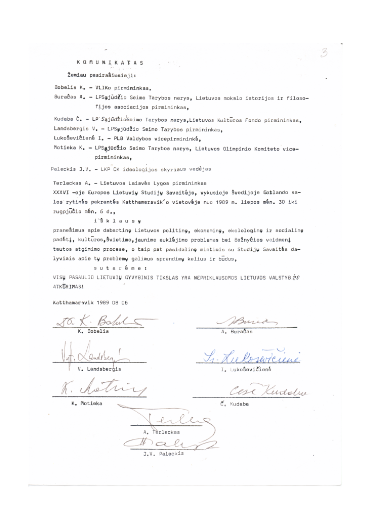 The document of the Gotland Declaration, compiled and signed in August 6, 1989, during the congress of the European Week of Lithuanian Studies in Gotland (Sweden). Fotografas nenurodytas. Lietuvos valstybės naujasis archyvas

The Gotland declaration is issued in the island of Gotland (Sweden). It affirms the importance of an independent Lithuanian state for all the Lithuanians in the world. 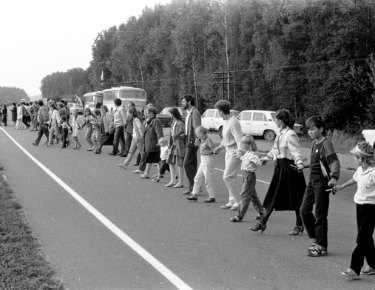 In the occasion of the 50th anniversary of the Molotov–Ribbentrop Pact, ca. two million people hold hands in a 600-kilometer human chain from Vilnius to Tallinn. The event becomes known as The Baltic Way.

The Supreme Soviet elections are held. They are in general the first free and multi-party elections of the Soviet era. The Sąjūdis movement wins 91 seats and Vytautas Landsbergis is nominated President of Lithuania. 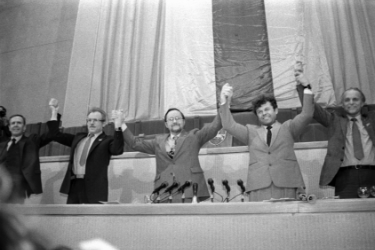 By signing the Act of the Re-Establishment of the State of Lithuania (in Lithuanian: Aktas dėl Lietuvos nepriklausomos valstybės atstatymo), Lithuania becomes the first Soviet Republic to declare its independence from the USSR, soon followed by Latvia and Estonia. Moldavia is the first country to acknowledge the declaration inside the Soviet Union. The international community, instead, hesitates.

As a response to the Act, the Soviets impose an economic blockade to Lithuania. Fuel, essential goods, and even hot water are in shortage for 74 days. Despite the difficulties, Lithuania does not step back on its declaration of independence.

The Lithuanian Communist Party changes its name into Democratic Labour Party of Lithuania. 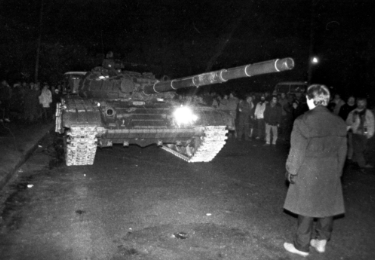 At the TV tower on the tragic night of January 13, 1991: an unarmed citizen against a Soviet tank. Vilnius, January 13, 1991. Fot. Andrius Petrulevičius. Lietuvos centrinis valstybės archyvas

Following a peaceful and brave demonstration in defense of the Vilnius Television Tower and the Parliament, fourteen Lithuanian protesters are killed by Soviet troops and tanks, and 702 are injured. Known as the “January killings”, this key-event opens the eyes of the international community.

Iceland is the first non-Soviet country to recognize Lithuania as an independent state. Denmark follows on February 28. By the end of August and the beginning of September, most of the Western world joins.

Soviet paramilitaries kill seven Lithuanian guards and injure another sixty on the Belarusian border in what is known as the “Medininkai massacre”. There was of course no border between Belarus and Lithuania during Soviet times, so its establishment, from the part of the Lithuanian state, was interpreted by Moscow as illegal.

Following a failed coup d’état attempted by the communist leaders against Gorbachev, and after American President George H.W. Bush’s threat that U.S. would react to another military intervention in Lithuania, Soviet Union finally acknowledges Lithuania’s independence. The event marks the ideal ending to the Singing Revolution.

Lithuania, Estonia and Latvia become members of the United Nations.

Lithuanians approve the adoption of the Constitution of the Republic of Lithuania (in Lithuanian: Lietuvos Respublikos Konstitucija), currently in use.