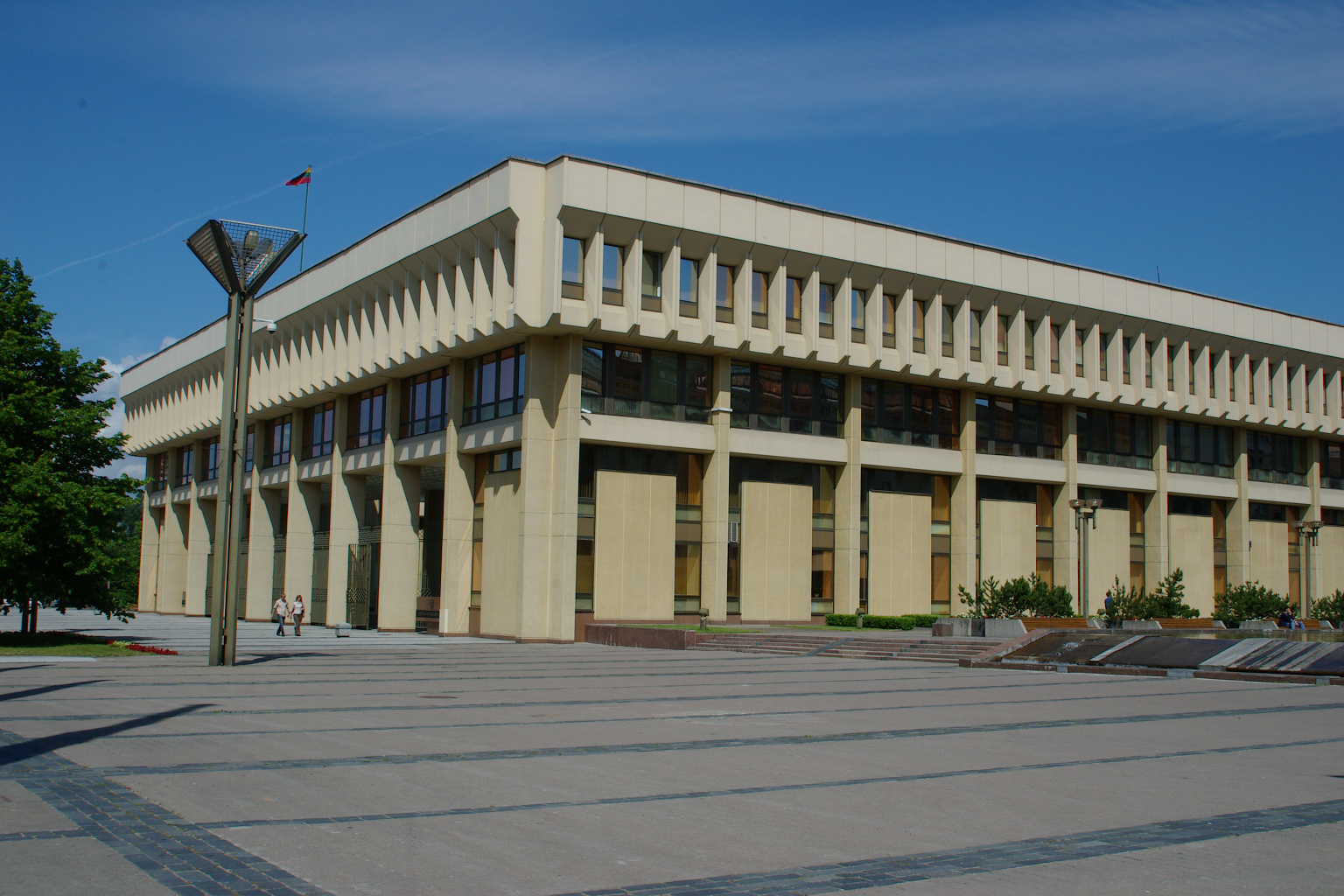 The 6th Congress of the Lithuanian Communist Youth, in 1951, Vilnius. On the rostrum, Antanas Raguotis, First Secretary of the Leninist Young Communist League. Among the other notable figures: 3rd from the left, the Chairman of the Council of Ministers of the LSSR Mečislovas Gedvilas; 5th from the left, the Chairman of the Presidium of the Supreme Soviet of the LSSR Justas Paleckis; 12th from the left, the First Secretary of the Luthuanian Communist Party (LCP) Antanas Sniečkus; 3rd from the right – LCP deputy Vladas Niunka. Vilnius, 1951. Photographer L. Meinartas. Lithuanian Central State Archives. 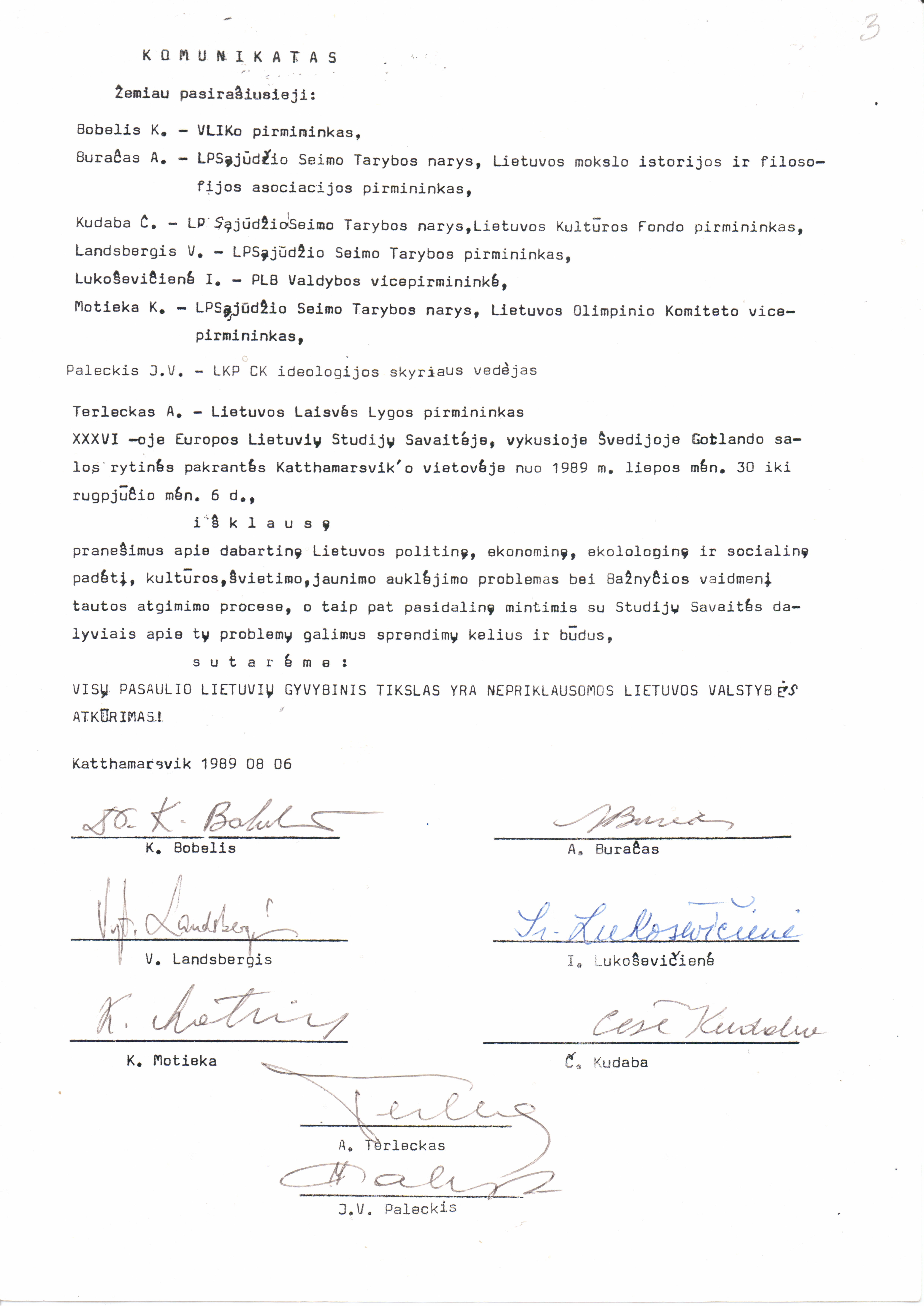 The document of the Gotland Declaration, compiled and signed in August 6, 1989, during the congress of the European Week of Lithuanian Studies in Gotland (Sweden). Unknown photographer. Lithuanian State Modern Archives. 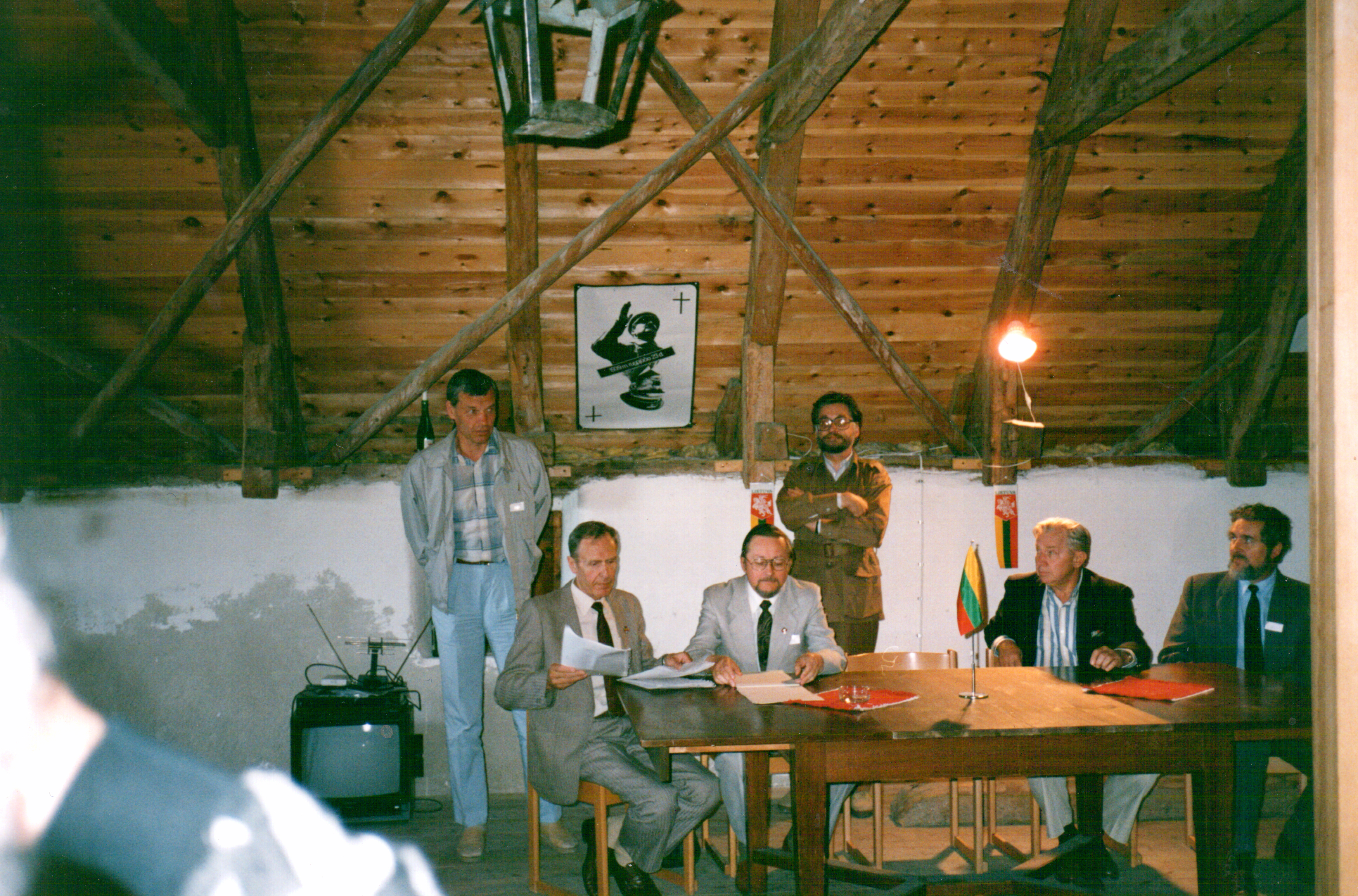 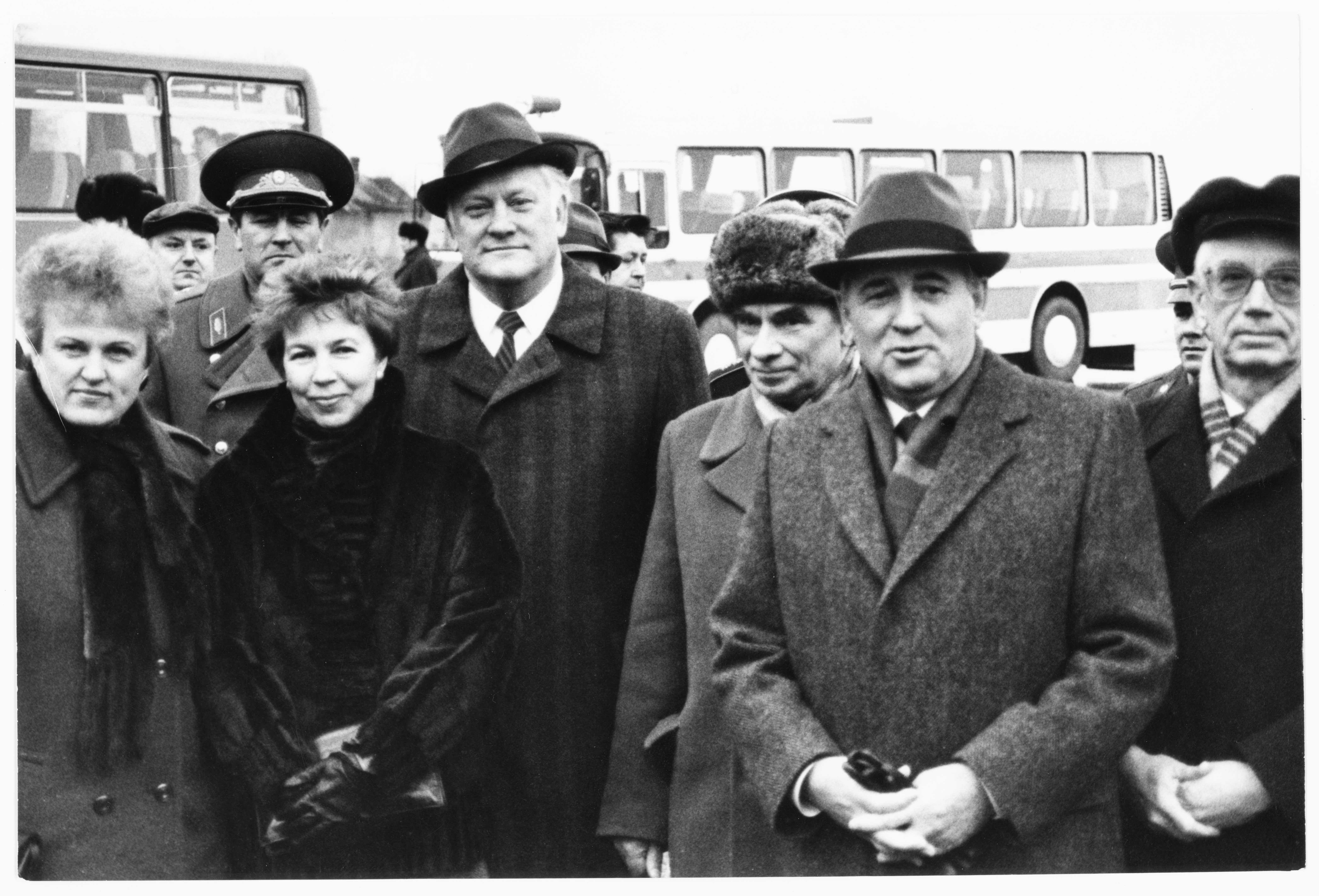 During its national assembly in Kaunas, on February 15-16, Sąjūdis called for the re-establishment of a democratic and independent Lithuanian state. It was the final strike to the original intention of the movement to simply support the perestroika and glasnost processes. From now on, all the efforts of Sąjūdis would be directed to the achievement of Lithuanian independence tout court. The first important “direct” action in this respect occurred on May 18, when the Lithuanian Supreme Soviet issued a declaration of self-determination and restoration of state sovereignty for Lithuania. The declaration was approved by a vote of 291 against 8, with 3 abstaining.
On August 6, representatives of Lithuania and Lithuanians who had to flee abroad (the so-called “Lithuanian diaspora”) gathered in the island of Gotland (Sweden) and issued a document known as “Gotland Declaration”, which stated that “it is a vital goal of the Lithuanians of the world to reestablish an independent Lithuanian state.”
Between December and January of the following year, matters were brought to an even further step, creating significant tensions with the central authority. On December 4, the Lithuanian Supreme Soviet legalized a multi-party system, and on December 20 voted to make the Lithuanian Communist Party autonomous from Moscow. Five days later Gorbachev denounced the moves as “illegitimate” and threatened sanctions. In January, he proposed a compromise, offering more decentralization and more democratization, but the Sąjūdis leaders dismissed the suggestion as “a cheap lie and propaganda”. On January 13, Gorbachev accepted the multi-party system. Two days later, in an act of defiance towards Moscow, Algirdas Brazauskas, the head of the Lithuanian Communist Party, was elected by the Lithuanian Supreme Soviet as President of the Republic.

A segment of the Baltic Way at the Green Bridge in Vilnius. August 23, 1989. Phototgrapher Jonas Kernagis. Lithuanian State Central Archives. 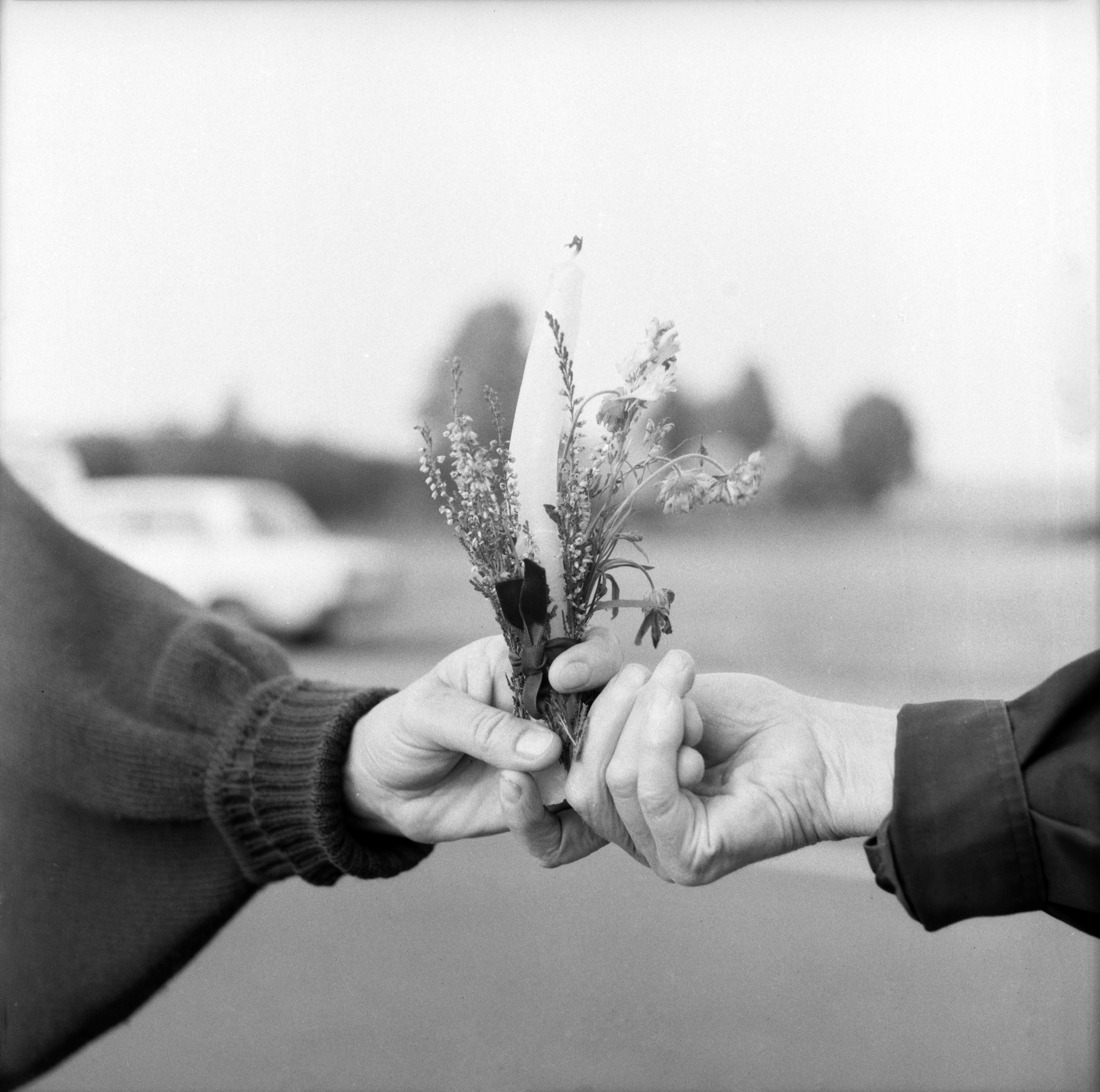 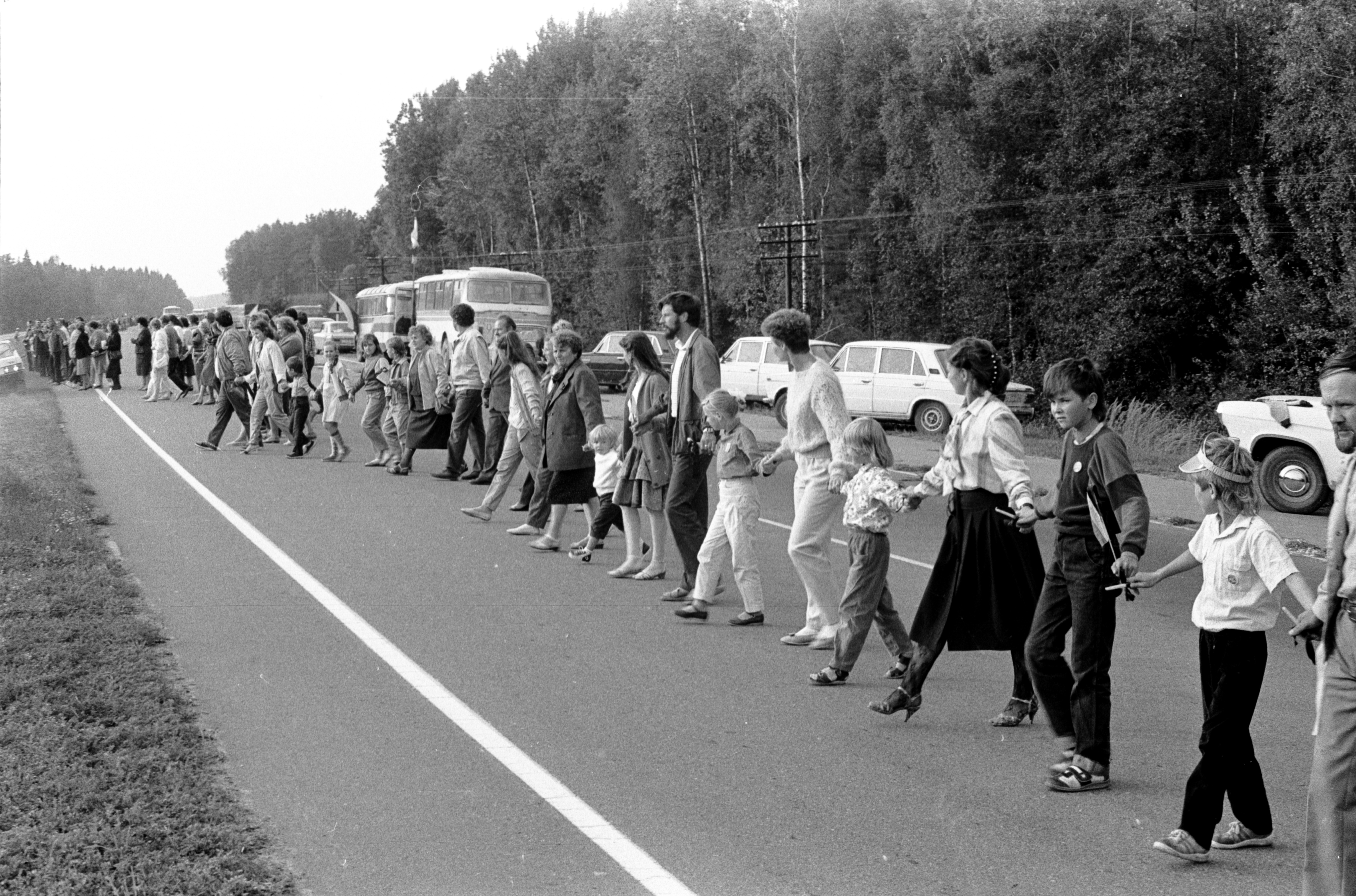 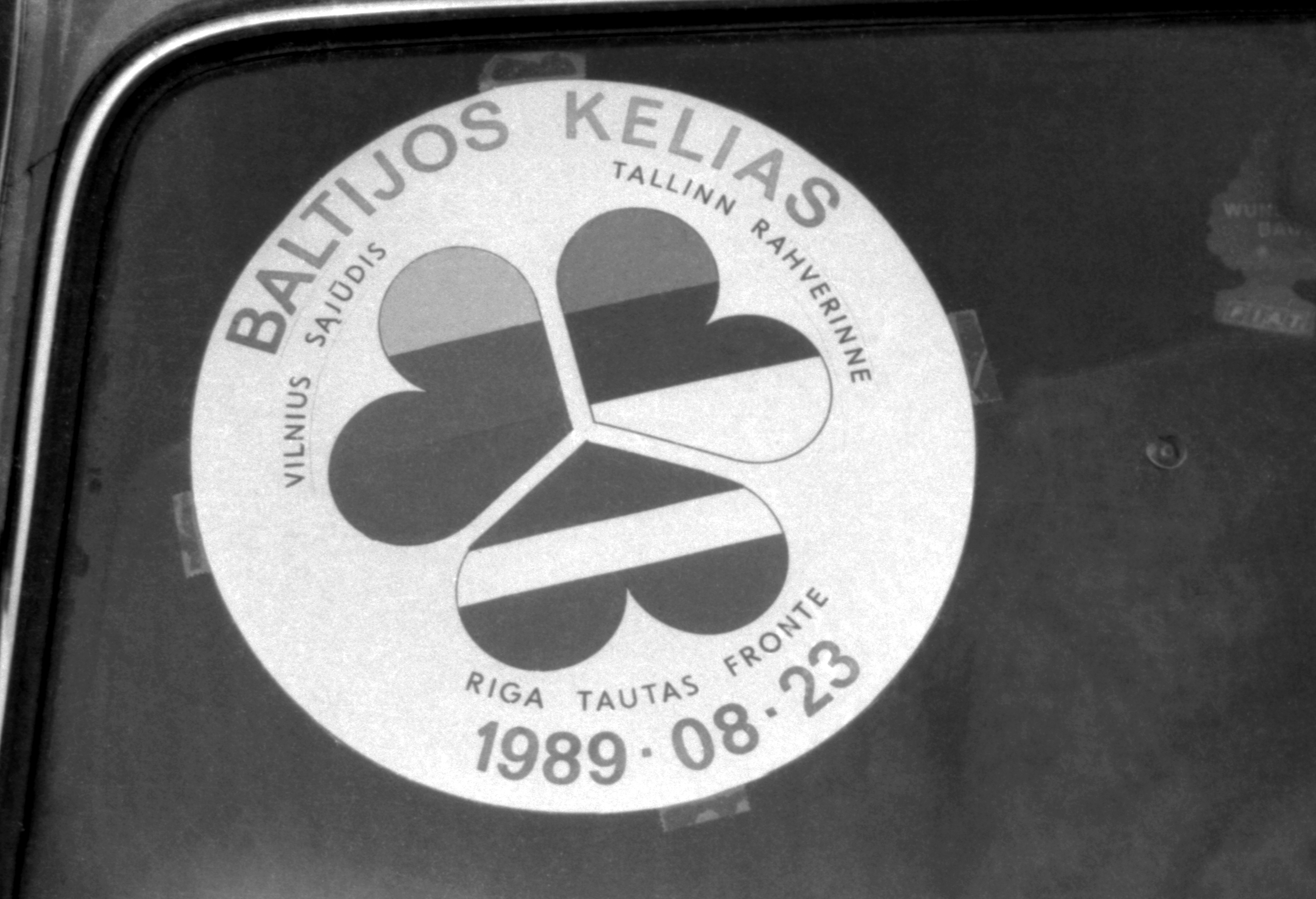 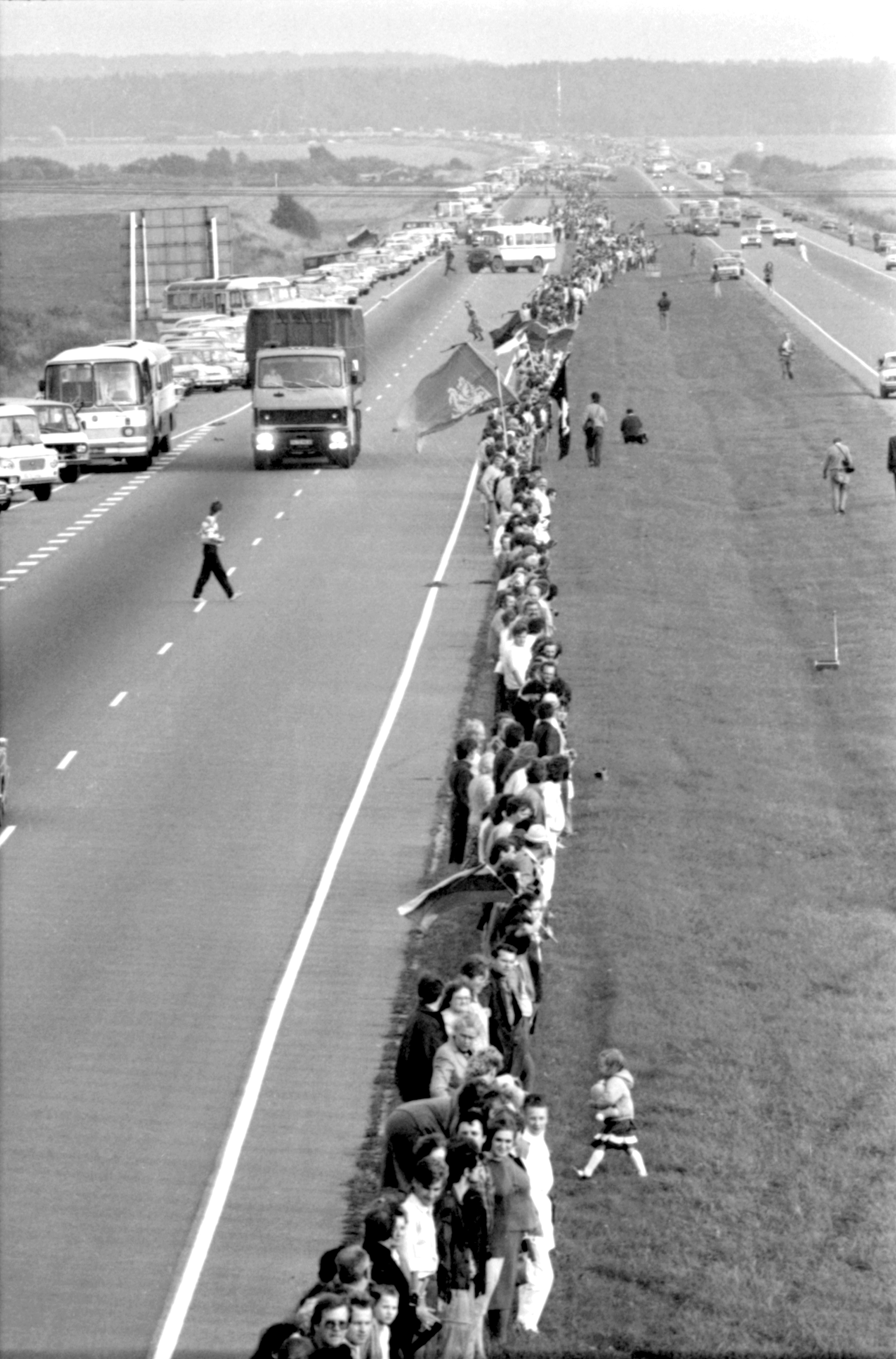 “The Inimitable Baltic Way”, Ministry of Foreign Affairs of the Republic of Lithuania, 2020
THE BALTIC WAY

Among the events that were organized as a common action across the three Baltic States, the so-called Baltic Way occupies a very special position. It consisted of a chain of about two million people holding hands for 675.5 km uninterruptedly from Vilnius to Tallinn, during August 23, 1989, in the occasion of the 50th anniversary of the Molotov–Ribbentrop Pact between the Soviet Union and Nazi Germany. People gathered from big cities and villages alike to join, making the human chain uninterrupted and crowded at any spot. After many attempts to catch the attention of the international community, the Baltic Way was probably the one that really broke through, being amply reported by media all over the world. Until then, the Soviet propaganda had succeeded to describe the various independence movements within the Union as isolated claims of few extremists. After the Baltic Way, it became manifest that the “few extremists” were at least two million.
As far as non-violent demonstrations go, the Baltic Way must be considered one of the biggest in size ever organized in human history. It showed the world, in a monumental way, that the Baltic States were a united front against the Soviet oppression, and that they wanted to achieve their independence without using any violence or military action. This remains one of the chief characteristics of the Singing Revolution: singing rather than fighting, holding hands rather than holding weapons.
The event has remained so impressed in collective memory that on August 23, 2020, it was revived in similar form from Vilnius to Minsk, as a manifestation of solidarity to the difficult political situation in Belarus.

A bumper sticker of the third edition of the Rock March. Author Mikas Malkovas. Personal archive of Stasys Paškevičius.

Two pages of the program of Rock March ’89, including the cover. Personal archive of Gintautas Babravičius. 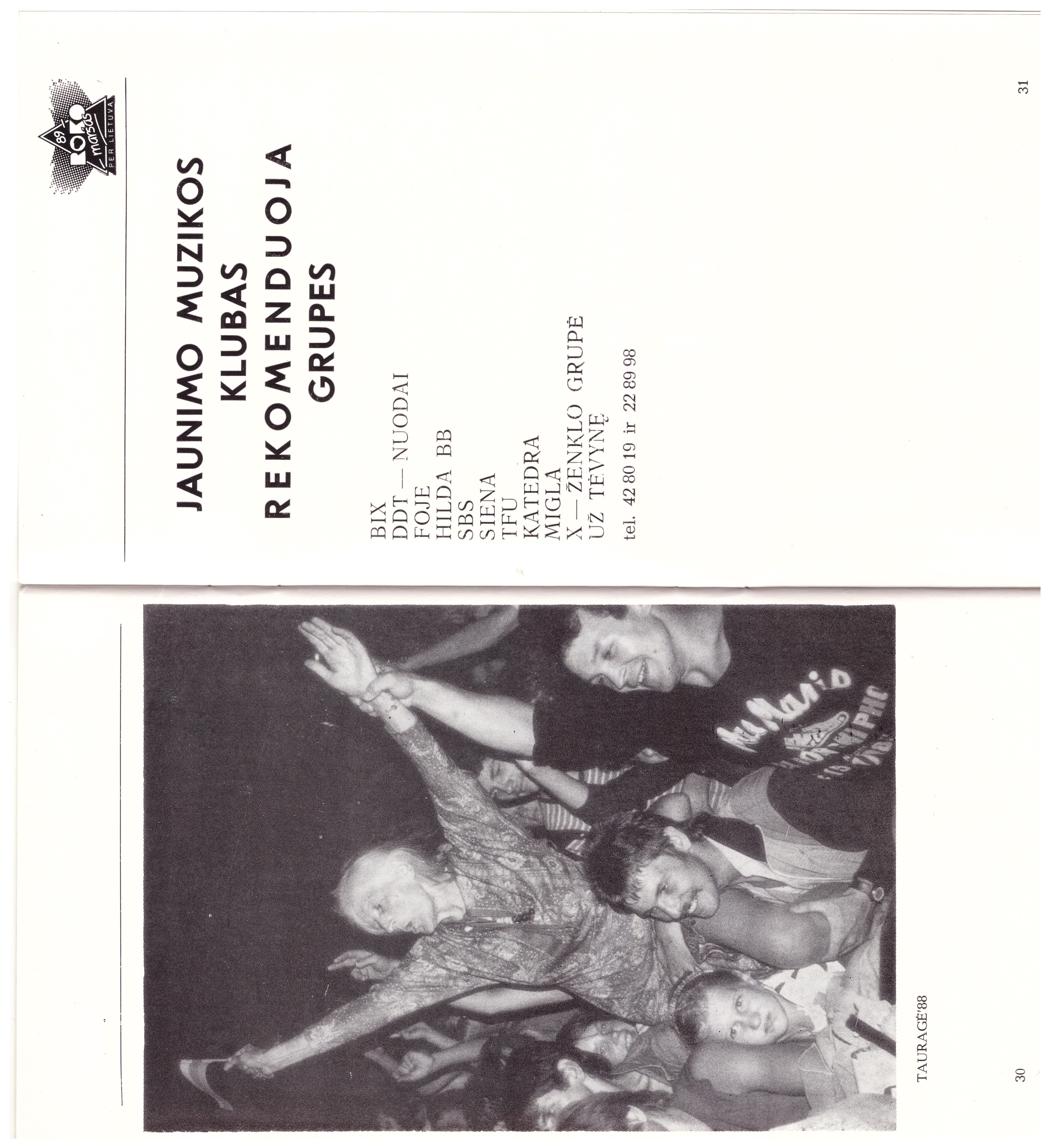 Two pages of the program of Rock March ’89, including the cover. Personal archive of Gintautas Babravičius.

Cover of the “Rock March ‘89” compilation album. This edition of the March was the first to be released on record. Ryga, 1990. Author of cover Mikas Malkovas. Vilnius County Adomas Mickevičius Public Library. 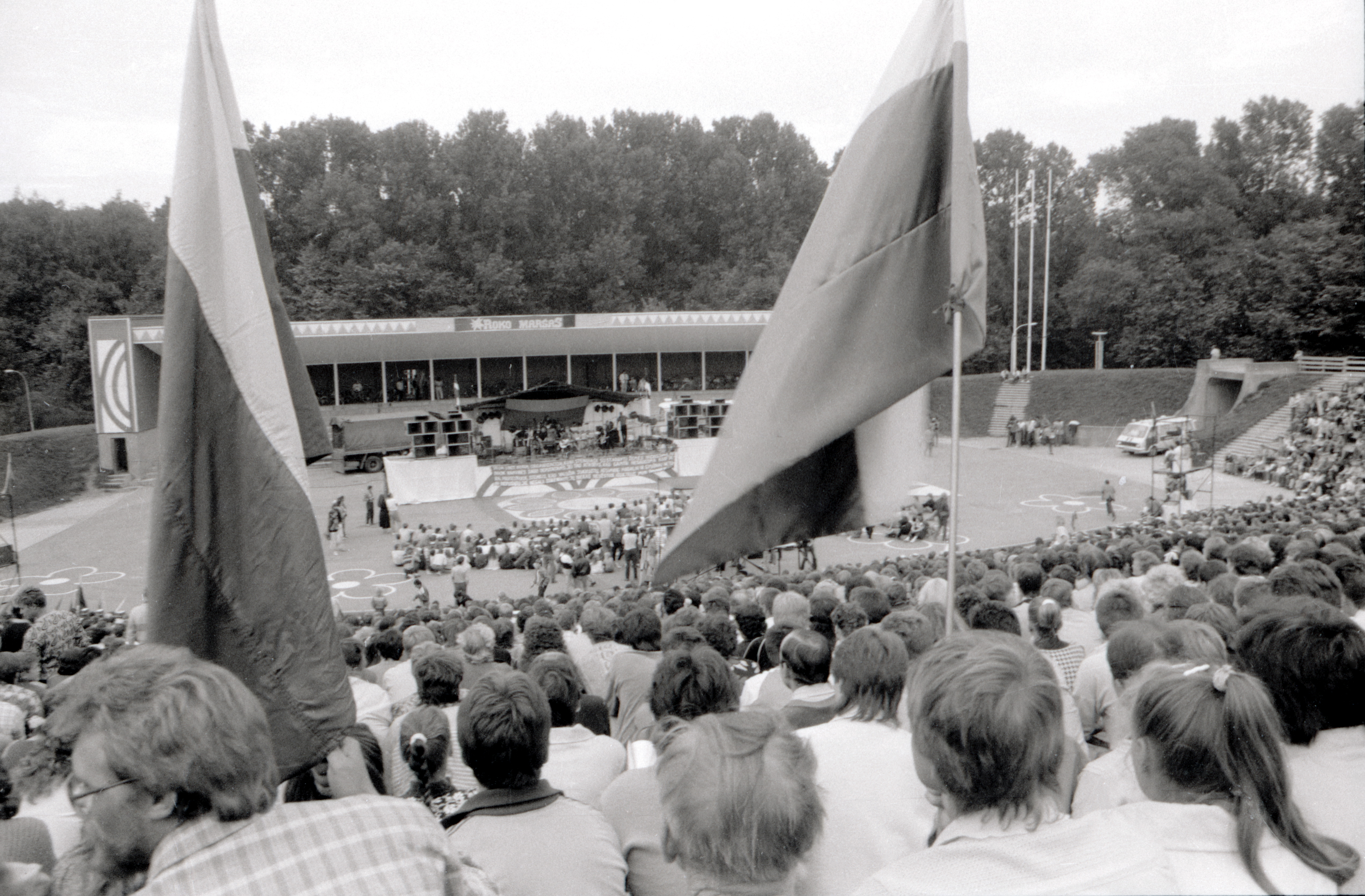 The third edition of the ”Rock March” started in Kaunas on the 28th of July 1989, and continued in Klaipėda, Mažeikiai, Šiauliai, Panevėžys and Vilnius.
With the intensification of Sąjūdis activities, the event became even more politicized than before, both in the music itself and in the speeches that accompanied the performances. Among others, a demand for the withdrawal of Red Army troops and other Soviet military objects in Lithuania was addressed, and of course the by-now-usual topic of the Molotov–Ribbentrop Pact. The songs had often distinctive patriotic and political tones.
Unlike the previous editions, this time the stage hosted only Lithuanian bands, but the great difference was that many of them were actually based in North America, giving the concerts an even more distinctive international flavor. From Lithuania, there were the “traditional” participation from Antis and from a new-born group called Foje, whose leader, Andrius Mamontovas, was destined to become one of the main popstars of Lithuania. The other acts were Naujas kraujas, Dainava, Dariaus Polikaičio grupė and Povilas Strolia from US, and Edžio Punkrio grupė from Canada.
This was also the first edition that was committed on an official album release – the compilation Roko maršas per Lietuvą '89 (“Rock march through Lithuania '89”).
This third edition turned out to be the last one during Soviet times. The Rock March was briefly revitalized in 1996 and 1997, featuring some of the hottest Lithuanian bands of the 1990’s (Lemon Joy, Biplan, The Skys…). The “veterans” Antis and Bix also appeared in the 1996 edition, ensuring a thematic continuity with the three marches of the late 1980’s.

TOWARDS THE DECLARATION OF INDEPENDENCE 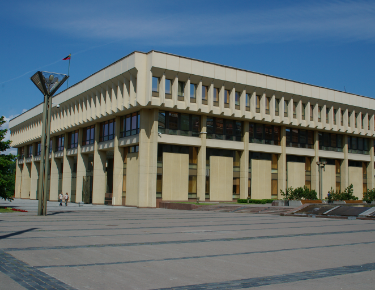 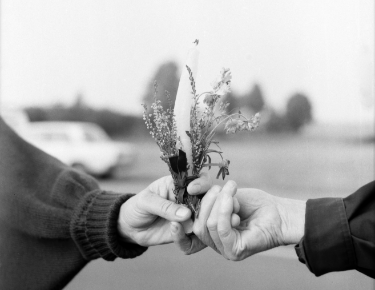 On August 23 the best-remembered and most impressive event of the Singing Revolution takes place: a human chain of almost 700 km, from Vilnius to Tallinn.

The third edition of the "Rock March" starts in Kaunas. It features seven Lithuanian bands, five of which are based in North America.