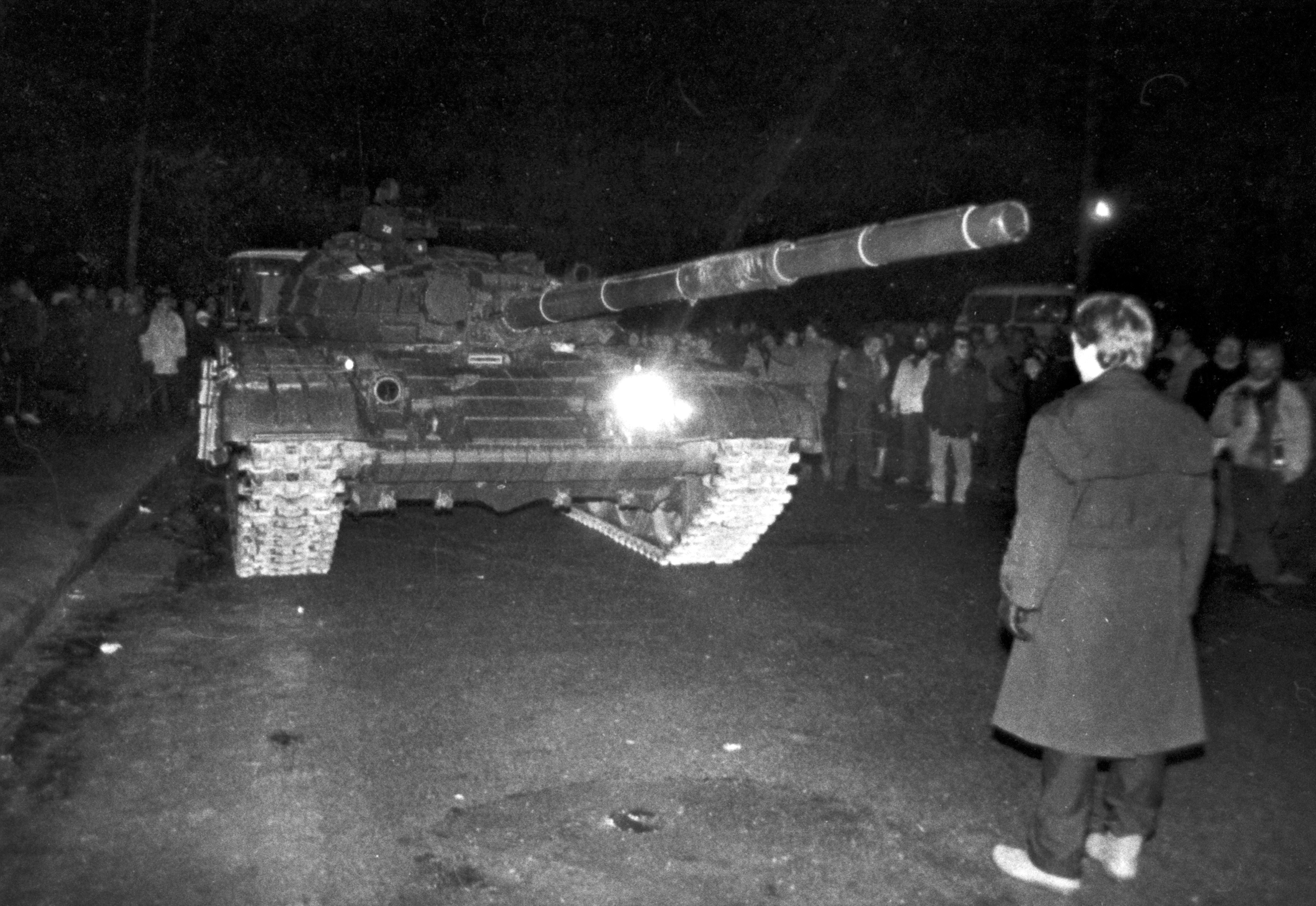 At the TV tower on the tragic night of January 13, 1991: an unarmed citizen against a Soviet tank. Vilnius, January 13, 1991. Photographer Andrius Petrulevičius. Lithuanian Central State Archives. 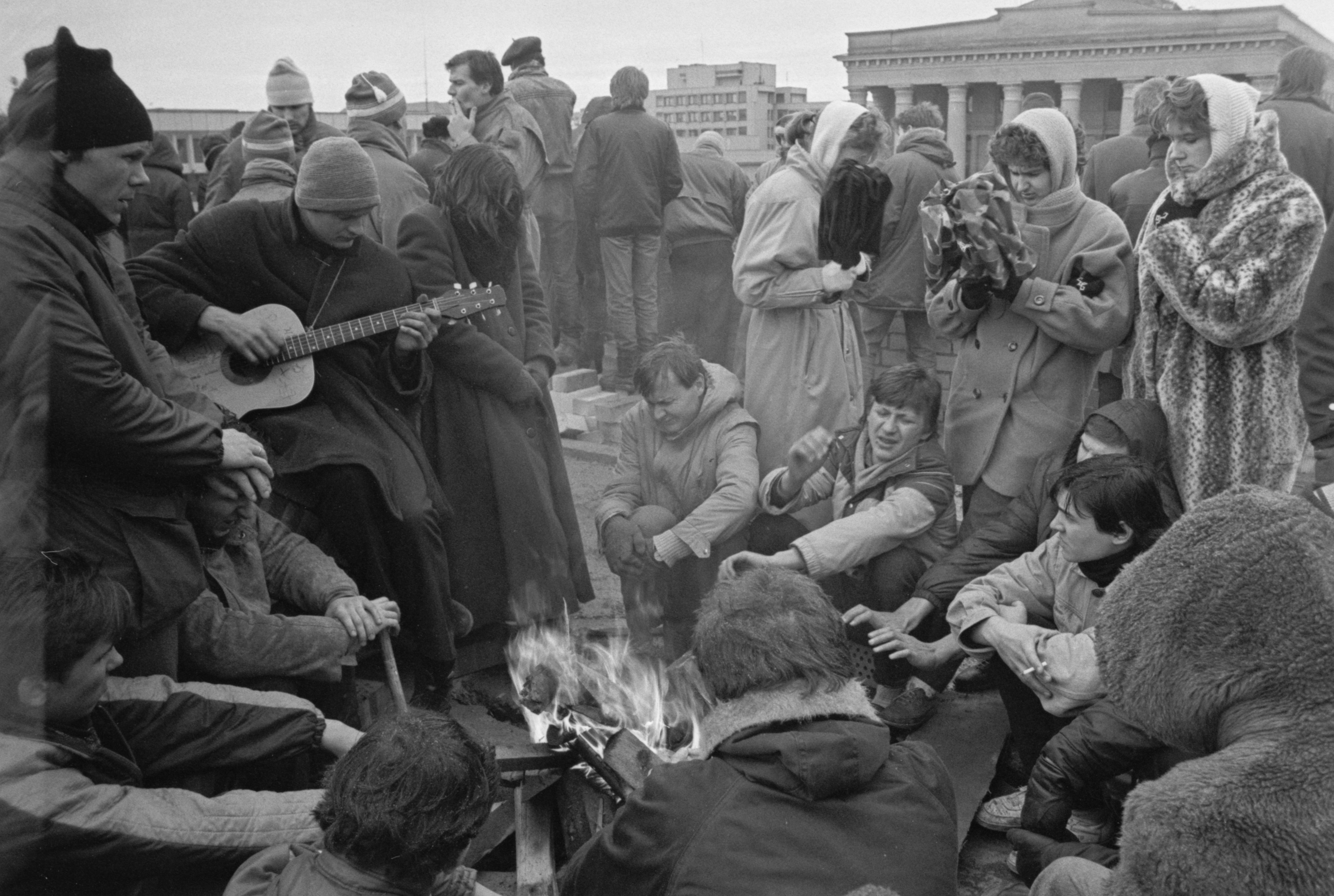 Citizens warm up with a fire and a guitar by the House of Parliament. Vilnius, January 13-14, 1991. Photographer Algimantas Žižiūnas. Lithuanian Central State Archives. 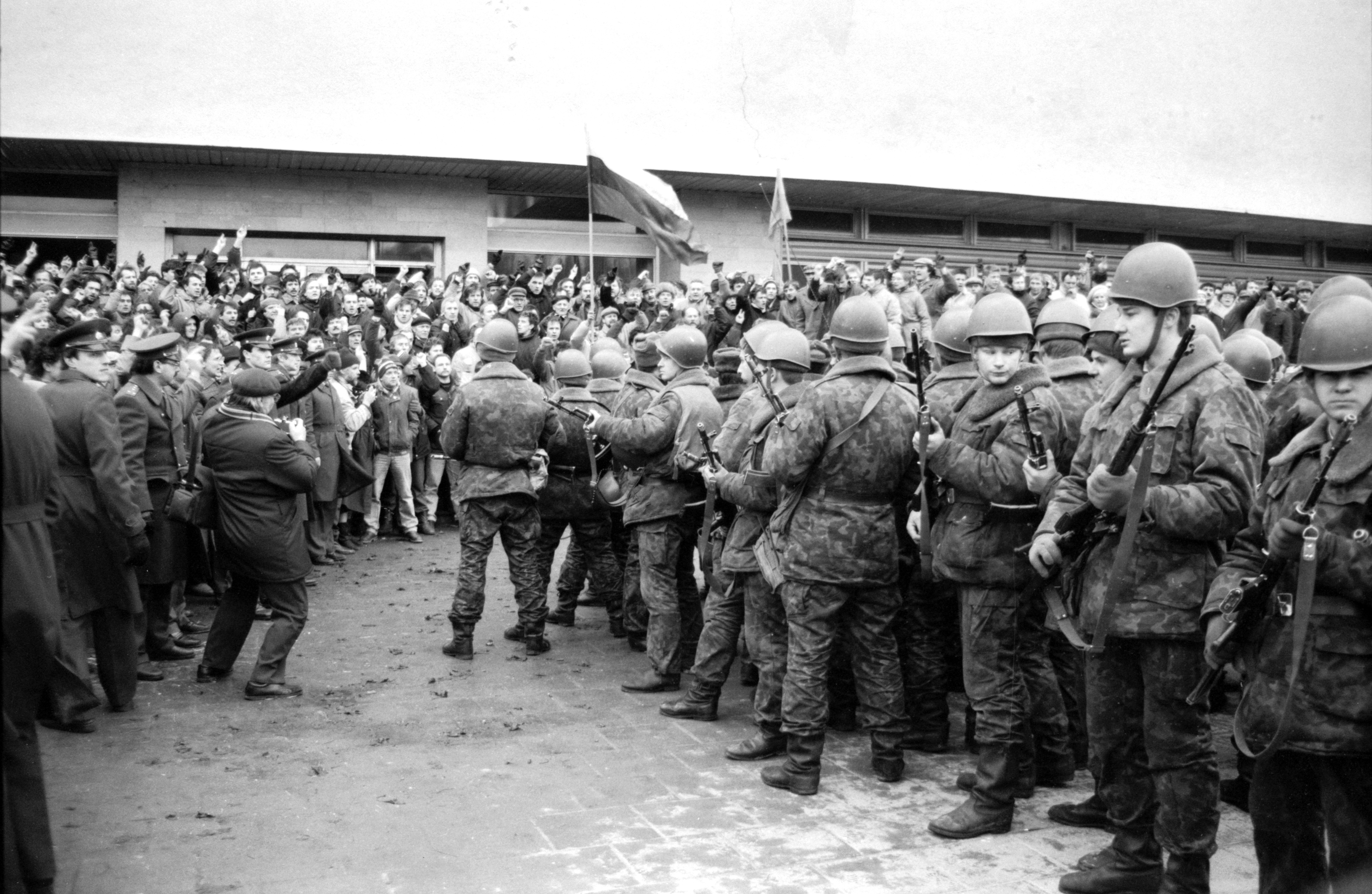 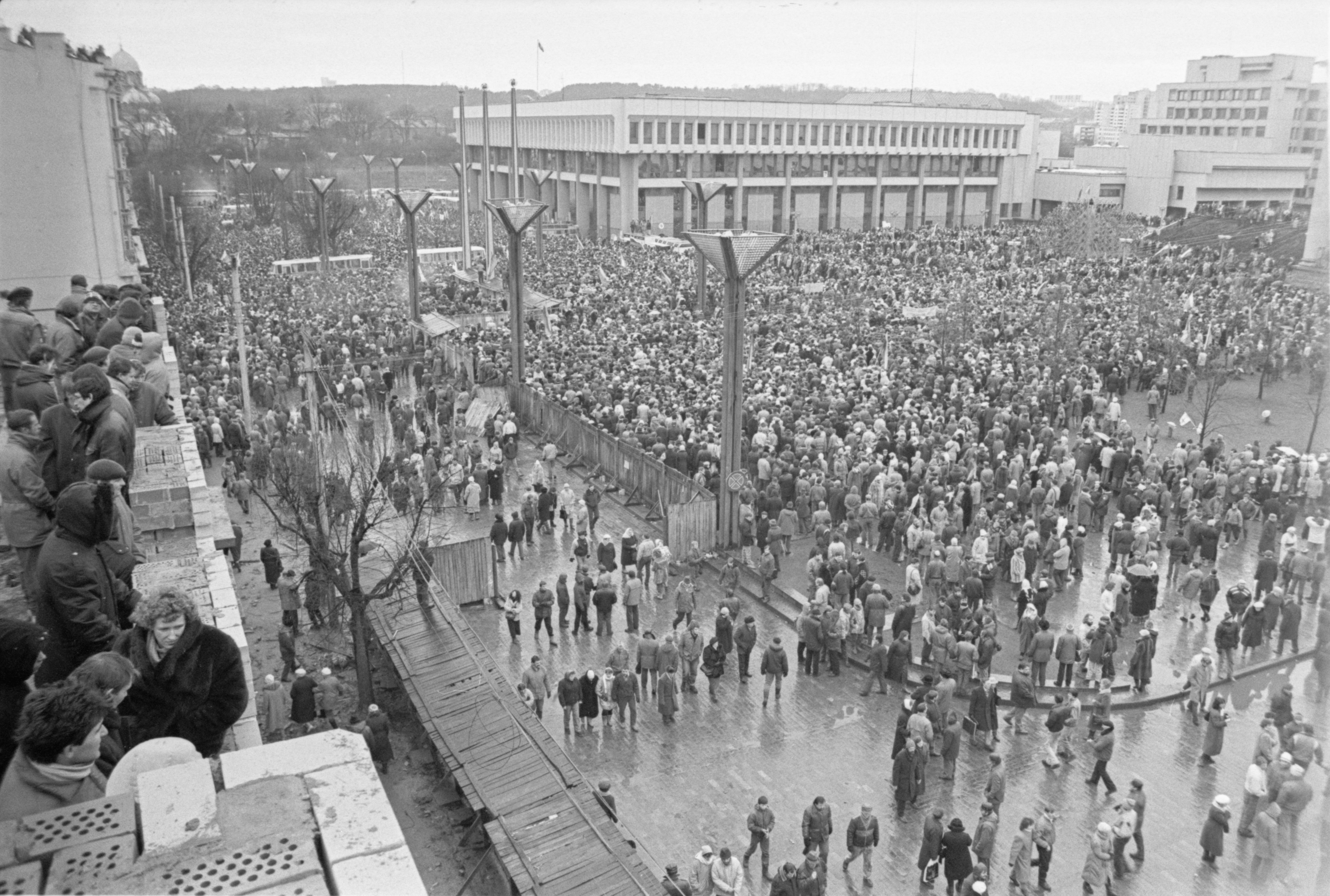 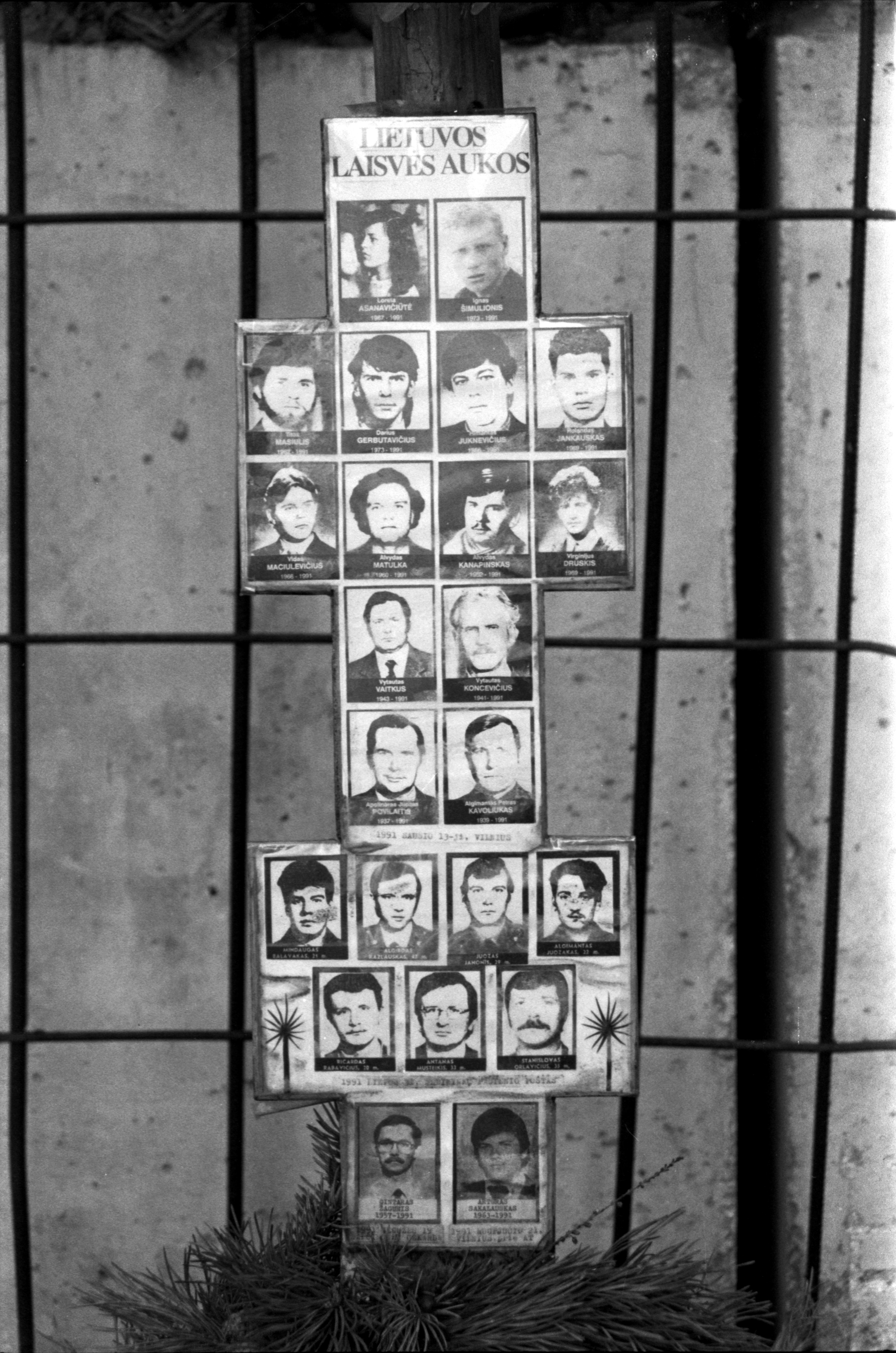 Photos of the victims of the January killings, displayed by the barricades near the Parliament. Vilnius, January 18, 1994. Photographer Larisa Dmuchovskaja. Lithuanian Central State Archives.

The13th of January, Lithuanian Radio and Television, 1991
“…THEN THEY FIGHT YOU…”: THE JANUARY KILLINGS

Once also the economic blockade and all other attempts to mediation failed, and (most of all, perhaps) once the Lithuanian example inspired other Soviet Republics to secede or at least proclaim sovereignty, Gorbachev felt it was time for military intervention. On January 8, 1991, the military were sent to reestablish control. In three days, the Soviets seized numerous institutions, including the National Defense Department and the Press House. In response, large crowds of Lithuanians gathered around the main institutions in Vilnius, forming a human shield in their protection.
Just after midnight of January 13, 1991, things spiraled. The military encircled the TV tower, soldiers fired live ammunition overhead and into the unarmed civilian crowds, while tanks drove straight through lines of people. Fourteen Lithuanians were killed in the attack, either shot or crushed by tanks, plus one more who died by heart attack, and 702 were injured more or less seriously.
The “January killings” were the first event, during the Singing Revolution, to have a tragic conclusion. However, they also proved to be a sour defeat for Soviet Union: if ever the international community had any doubt on who was the aggressor and who the victim, the images of Soviet tanks shooting on unarmed citizens dispelled any remaining hesitation. From now on, the Western countries started recognizing Lithuanian independence as legitimate. On February 11, Iceland became the first non-Soviet country to do so. Denmark followed on February 28. By the end of August and the beginning of September, most of the Western world joined. 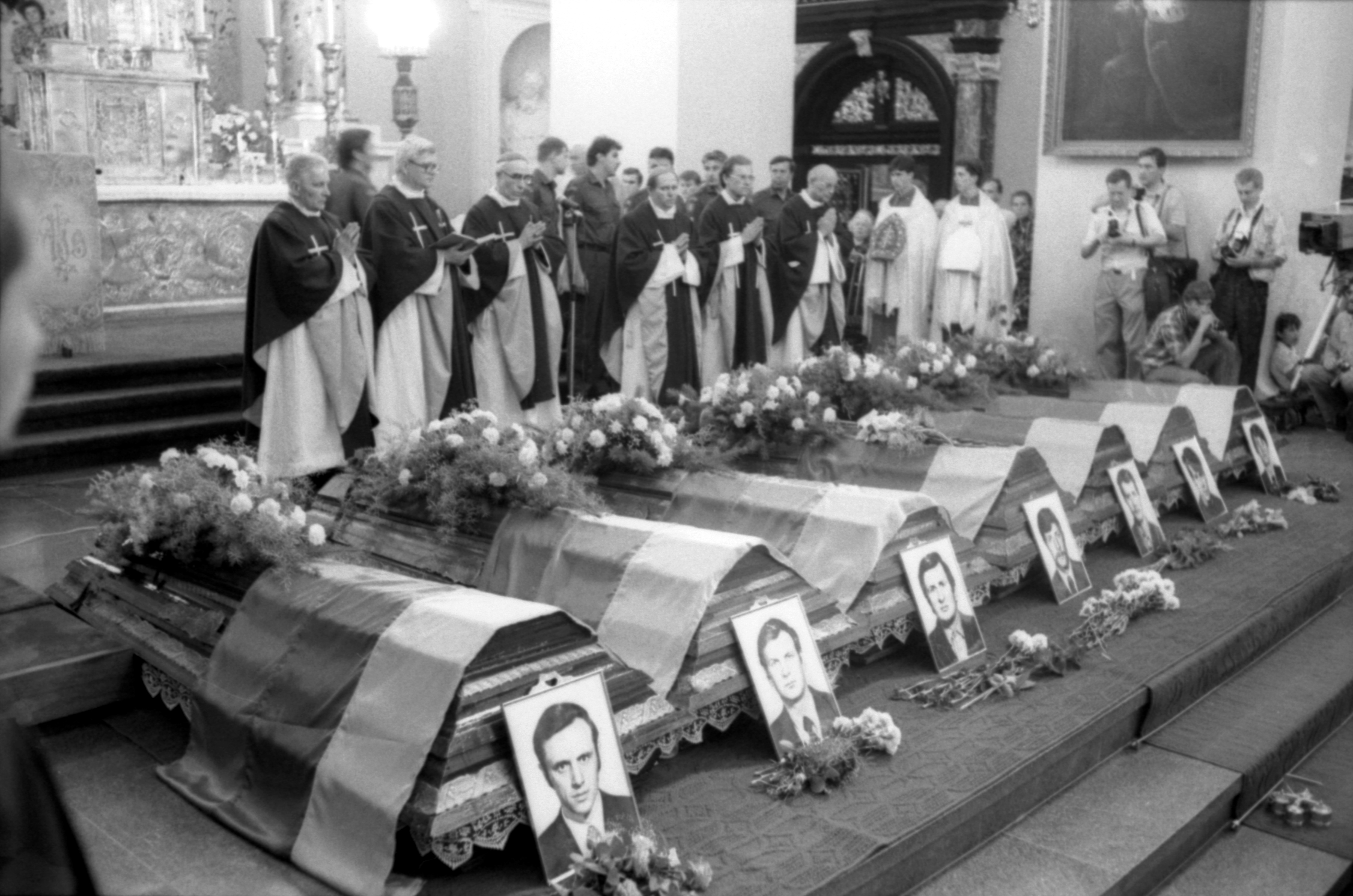 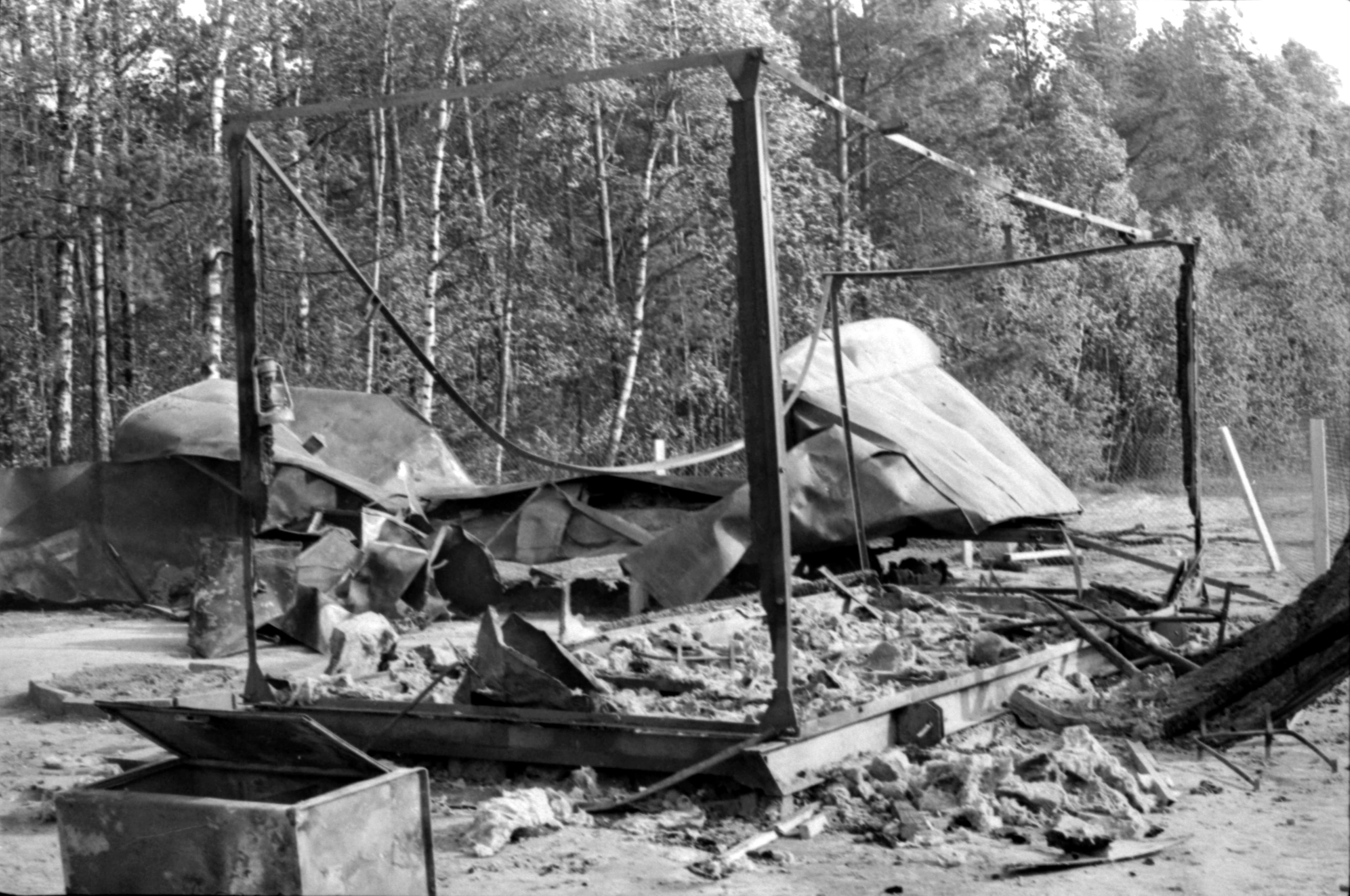 The customs offices in Šalčininkai and Eišiškės destroyed by the units of the Soviet special police OMON in 1990 and 1991. Photographer Aleksandras Kairys. Lithuanian Central State Archives.

Lithuania is welcome in the United Nations. The members of the Lithuanian delegation are Emanuelis Zingeris, Deputy of the Supreme Council of the Republic of Lithuania, Vytautas Landsbergis and Algirdas Saudargas, Minister of Foreign Affairs. The last from the left is the first Lithuanian representative at the United Nations, the diplomat Anicetas Simutis. United Nations Headquarters in New York, USA, General Assembly Hall, September 17, 1991. LR Diplomatic Archive of the Ministry of Foreign Affairs of the Republic of Lithuania. 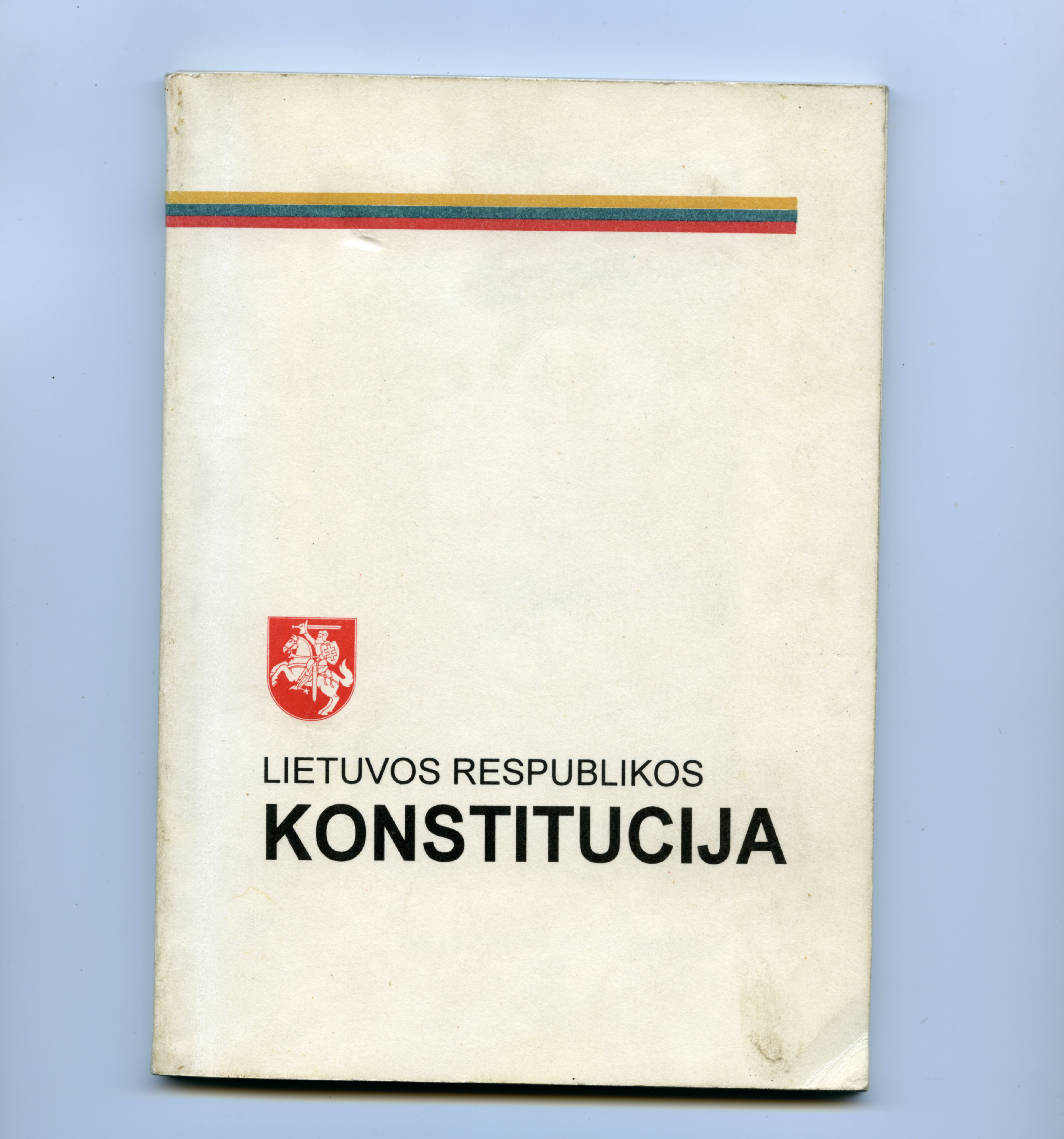 The Constitution of the Republic of Lithuania in the official publication from the Lithuanian Parliament’s Publishing House (1993). In the picture, the cover and the significant page 11, declaring the State of Lithuania as an independent and democratic republic. Vilnius County Adomas Mickevičius Public Library. 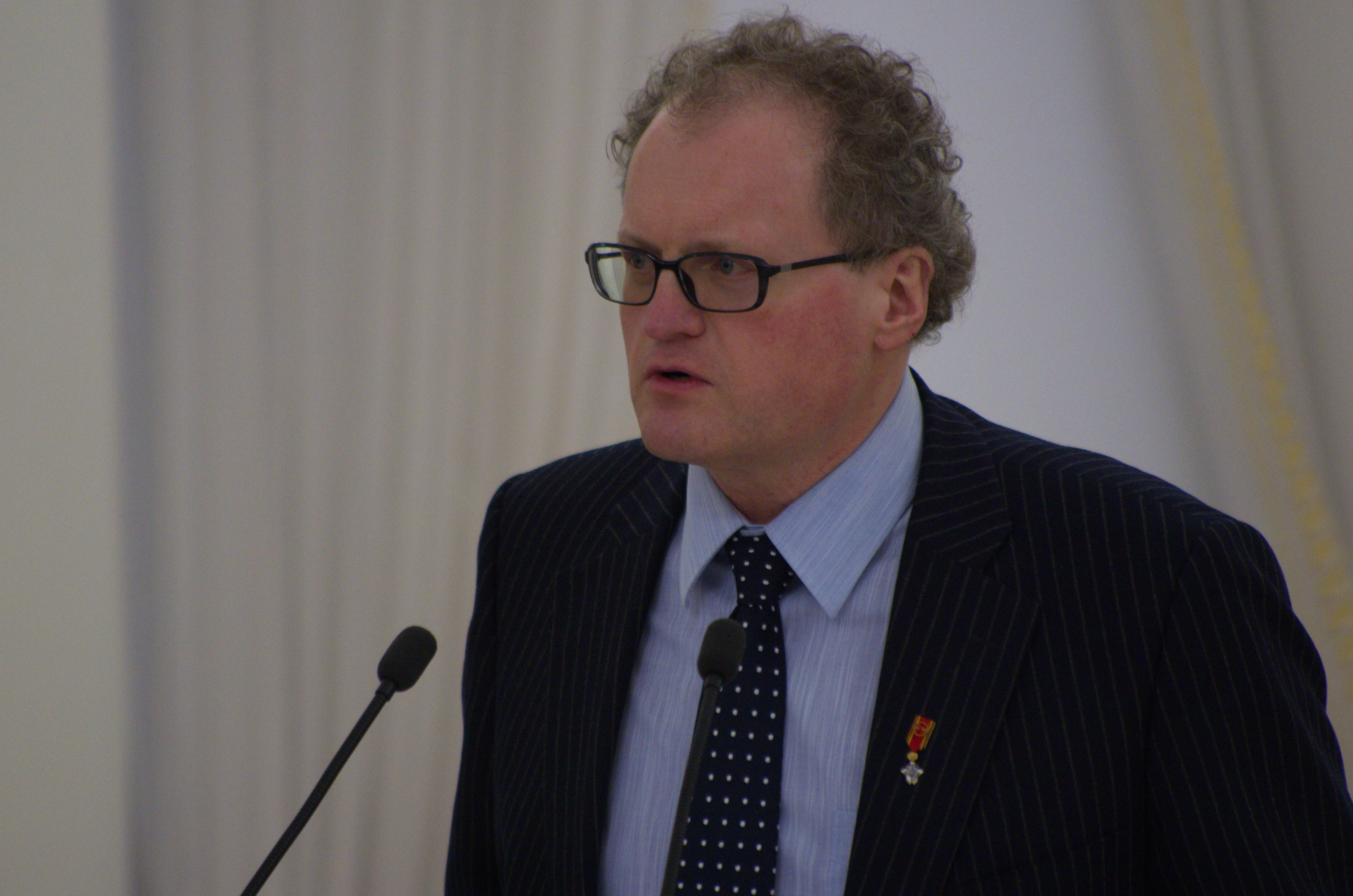 One of the foremost Lithuanian intellectuals, the late Leonidas Donskis, scholar and EU parliament member from 2009 to 2014. Vilnius, 2016. Photographer Larisa Dmuchovskaja. Lietuvos centrinis valstybės archyvas.
“…AND THEN YOU WIN”: INDEPENDENCE ACKNOWLEDGED

Another tragic episode occurred on July 31, as the Soviet paramilitaries killed seven Lithuanian guards and injured another sixty on the Belarusian border in what is known as the “Medininkai Massacre”. There was of course no border between Belarus and Lithuania during Soviet times, so its establishment, from the part of the Lithuanian state, was interpreted by Moscow as another act of defiance.
On September 6, following a failed coup d’état attempted by the communist leaders against Gorbachev, and after American President George H.W. Bush’s threat that U.S. would react to another military intervention in Lithuania, Soviet Union saw no alternatives than acknowledging Lithuania's independence.
The event marked the ideal ending to the Singing Revolution.
On September 17, Lithuania, along with Estonia and Latvia, became member of the United Nations. One year later, on October 25 1992, the Constitution of the Republic of Lithuania (in Lithuanian: Lietuvos Respublikos Konstitucija) was approved, in a form that is still largely unchanged nowadays.
In retrospective, the path leading to Lithuania’s freedom and particularly the fact that it was finally achieved after suffering a military attack, was the perfect proof of the veracity of Gandhi’s famous quote “First they ignore you, then they deride you, then they fight you, and then you win”. Incapable of stopping the growing independentist sentiments and actions, the Soviet regime saw in violence their last chance to restore their authority. But exactly that decision proved they had run out of options, and that they were next to defeat.

“…THEN THEY FIGHT YOU…”: THE JANUARY KILLINGS 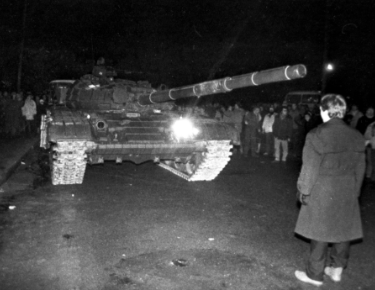 Following a peaceful demonstration in defense of the Vilnius Television Tower and the Parliament, on January 13, the Soviet military kill fourteen Lithuanian protesters and injury 702. The “January killings” open the eyes of the international community.

“…AND THEN YOU WIN”: INDEPENDENCE ACKNOWLEDGED 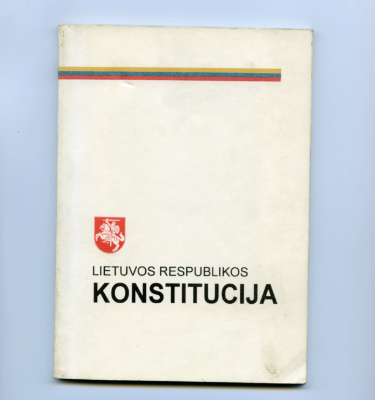