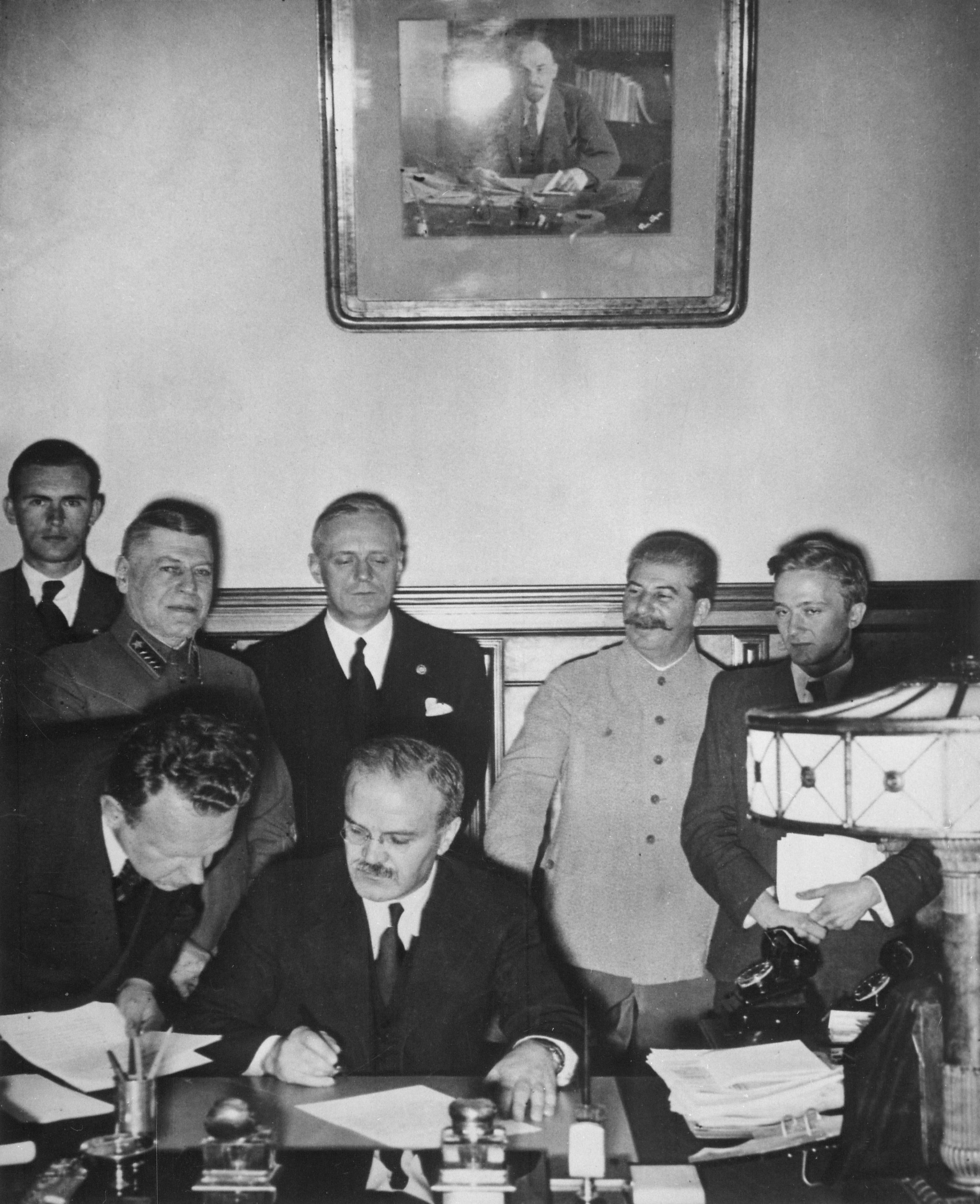 Vyacheslav Molotov signs Ribbentrop-Molotov Pact, with Joachim von Ribbentrop behind him and Joseph Stalin to the right. Moscow, 1939. Wikipedia

One of Stalin's many propaganda posters. Wikipedia.

Lithuanian partisans from the district of Dainava (in Southern Lithuania) LGGRTC Genocide and Resistance Research Centre of Lithuania.

Documentary "How we played the Revolution" (with EN subtitles)
Background

1987 marked for Lithuania the 47th year as a Soviet Republic. Excluding the three years of Nazi occupation, between 1941 and 1944, Lithuania had indeed been forcibly annexed to Soviet Union in 1940, as a consequence of the Molotov-Ribbentrop Pact the year before. The first years of occupation, known also as “Stalinist terror”, produced mass deportations of at least 130,000 Lithuanian citizens (70% of which women and children) to Siberia and other remote areas of the Union. Another 150,000 ca., consisting of partisans and political prisoners, were deported to the Gulags, the prison camps, starting from 1944, when an armed anti-Soviet resistance was organized in Lithuania. During the resistance, which lasted until 1953, an estimated total of 30,000 Lithuanian partisans and their supporters were killed. Individual partisans and small groups attempted to continue the fight, but around 1960 it had become clear that Lithuania was unable to win back its independence. While passively enduring the Sovietization process, Lithuanians saw their identity denied in various forms, their traditions prohibited, their freedom of expression suppressed. Things didn’t seem to change until 1985, when the new Soviet leader Mikhail Gorbachev inaugurated a new phase of political openness (called “glasnost”) and economic reforms (“perestroika”) that was welcome in the whole Union as a step towards democracy. Initially supportive of this process, Lithuania and other Republics realized that this could be the chance to dare for more. Maybe this was not just an opportunity for a more democratic Soviet Union. Maybe this was the opportunity they had been waiting and fighting for since 1940 – the opportunity of national freedom, independence and self-determination. 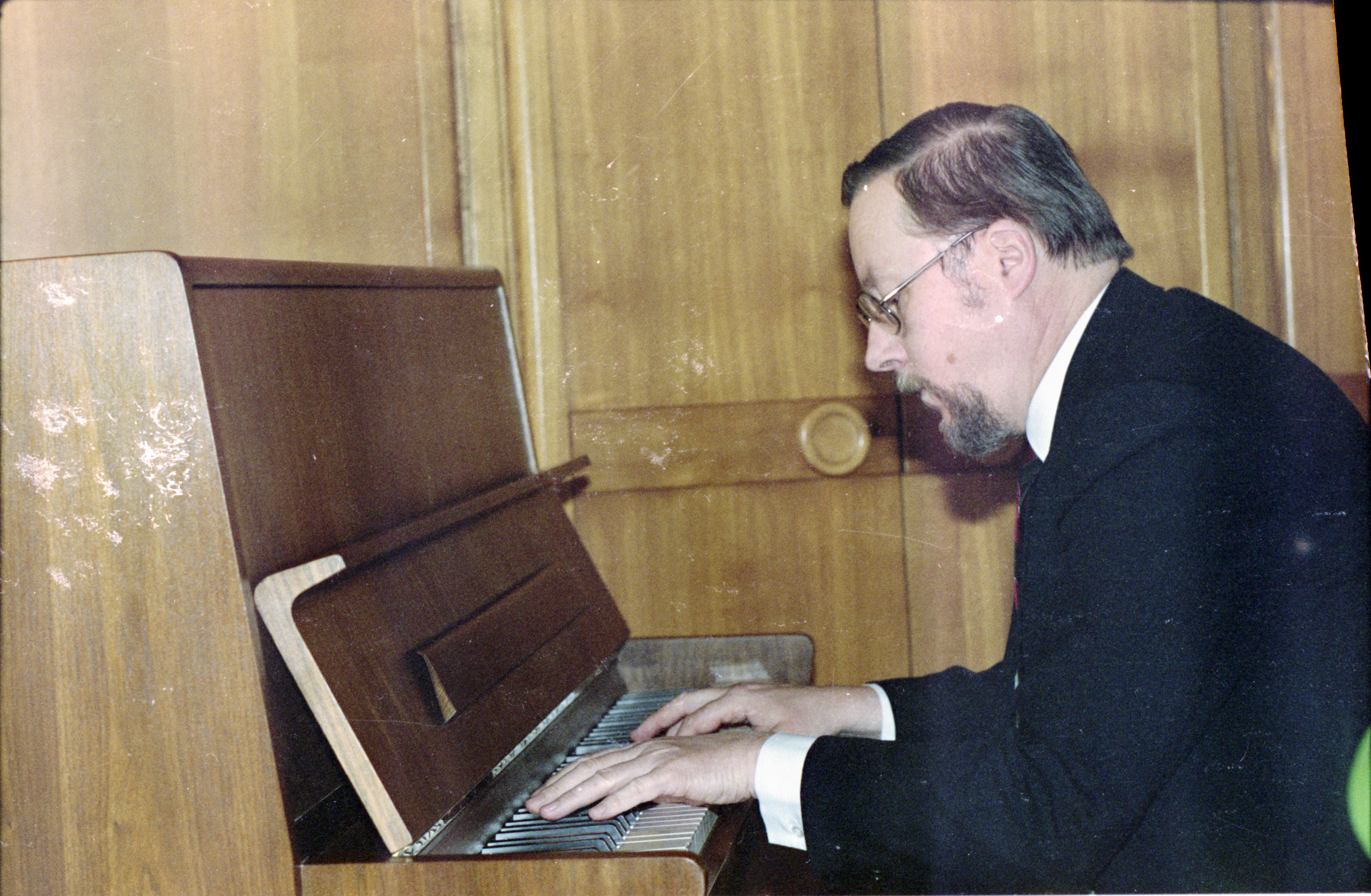 Just elected Chairman of the Supreme Council of the Republic of Lithuania (formally, the title of “president” could not be used), Vytautas Landsbergis plays piano in his office. Vilnius, April 14, 1990. Photographer Eugenijus Masevičius. Lithuanian Central State Archives. 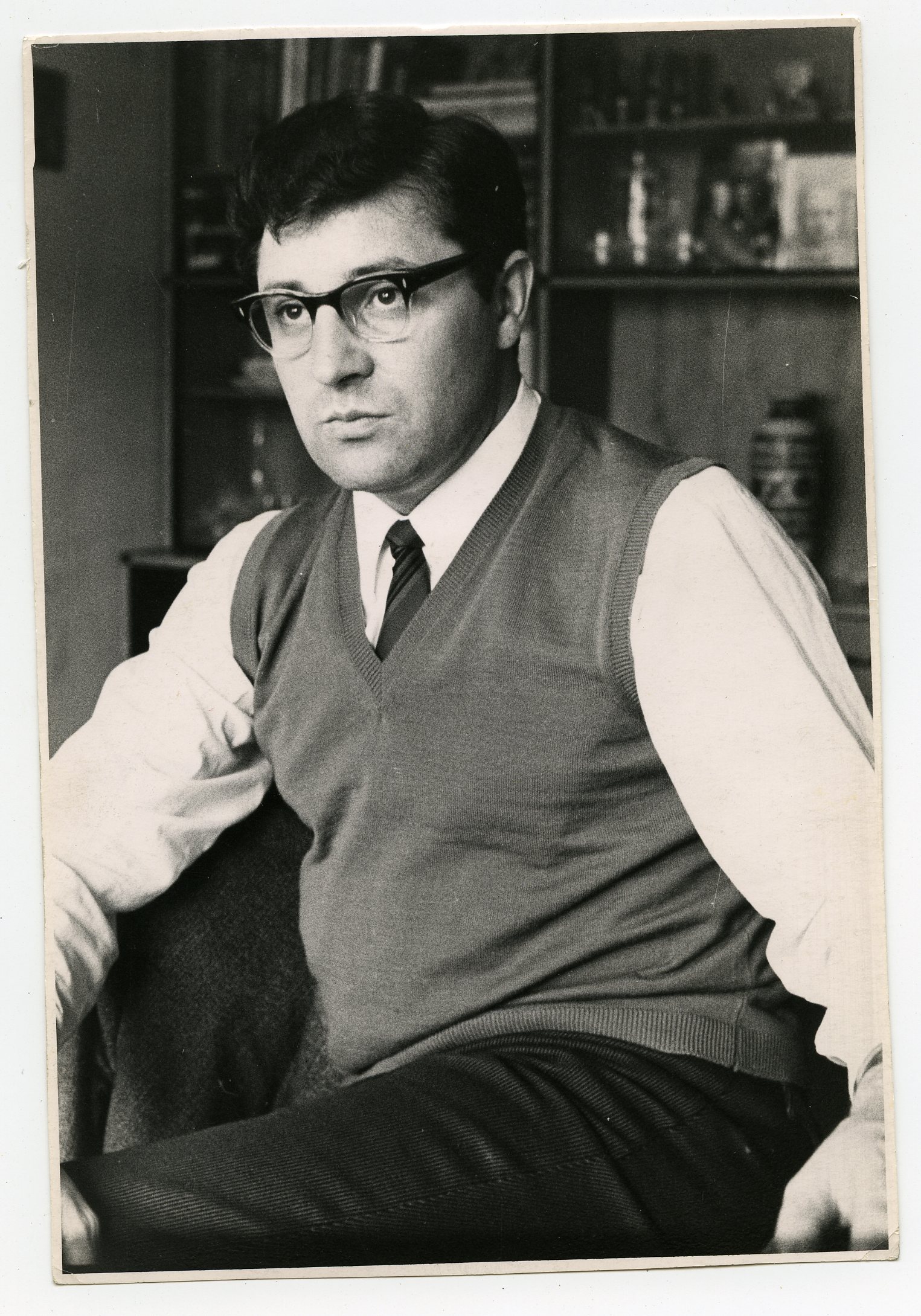 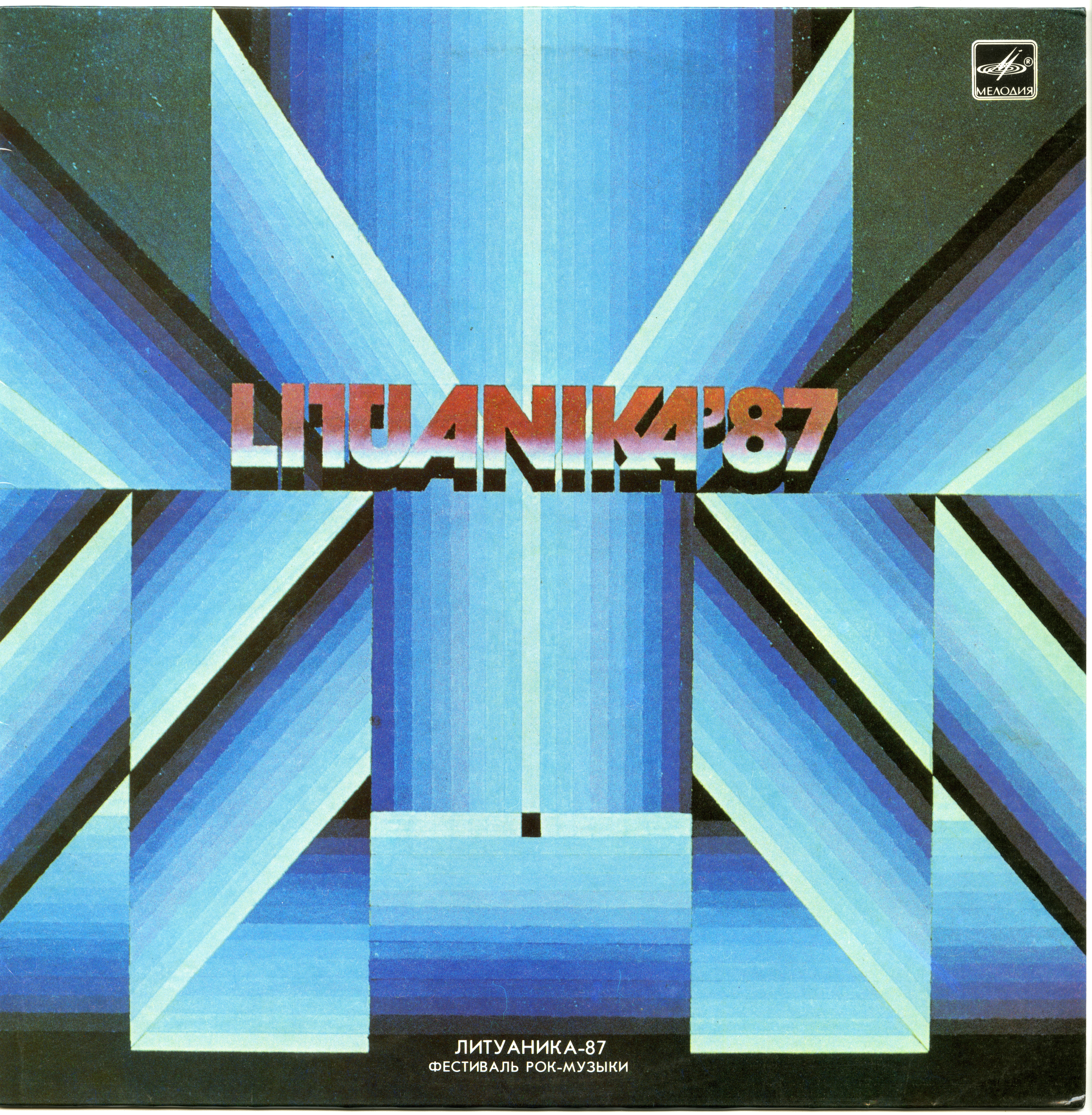 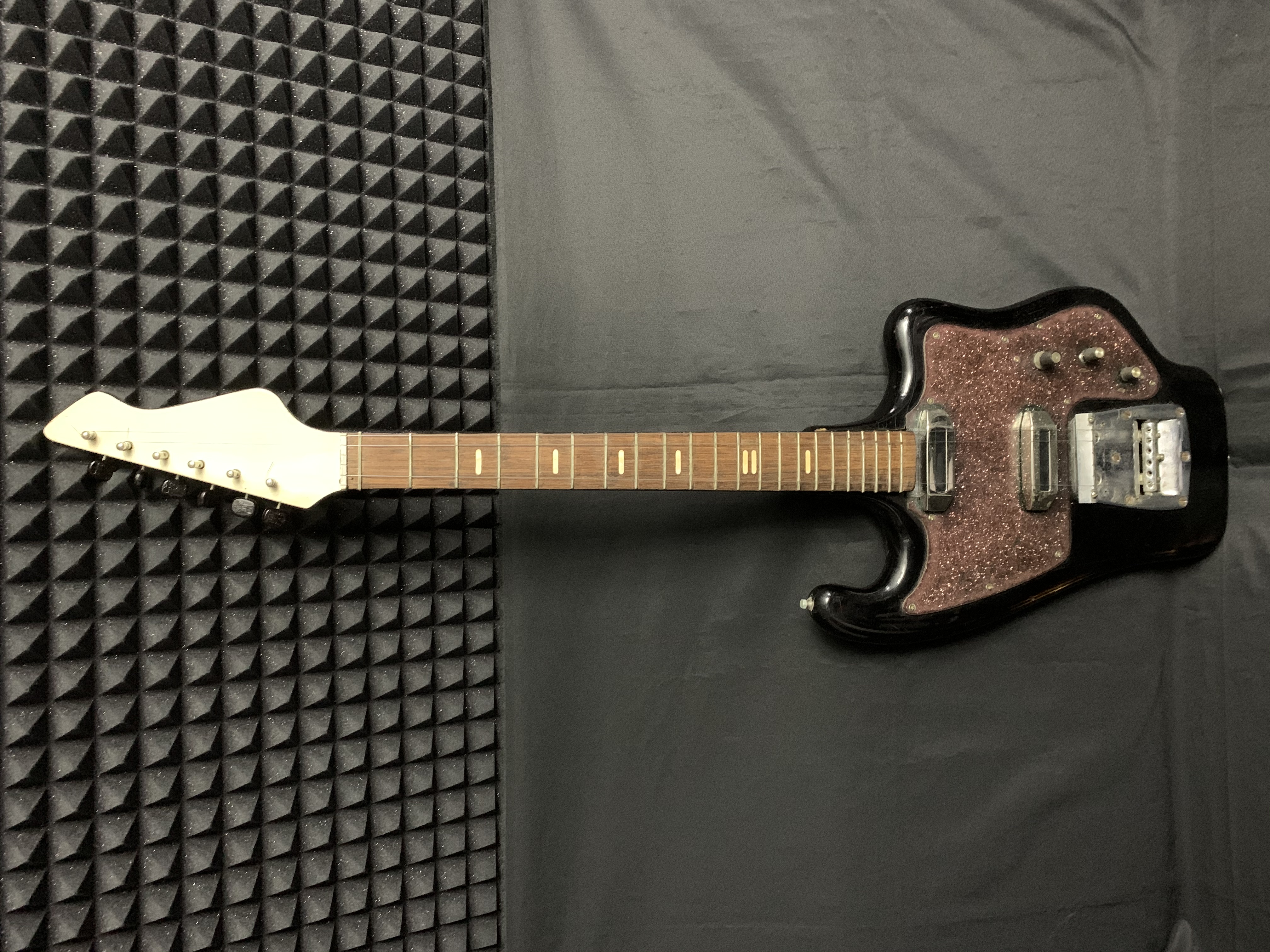 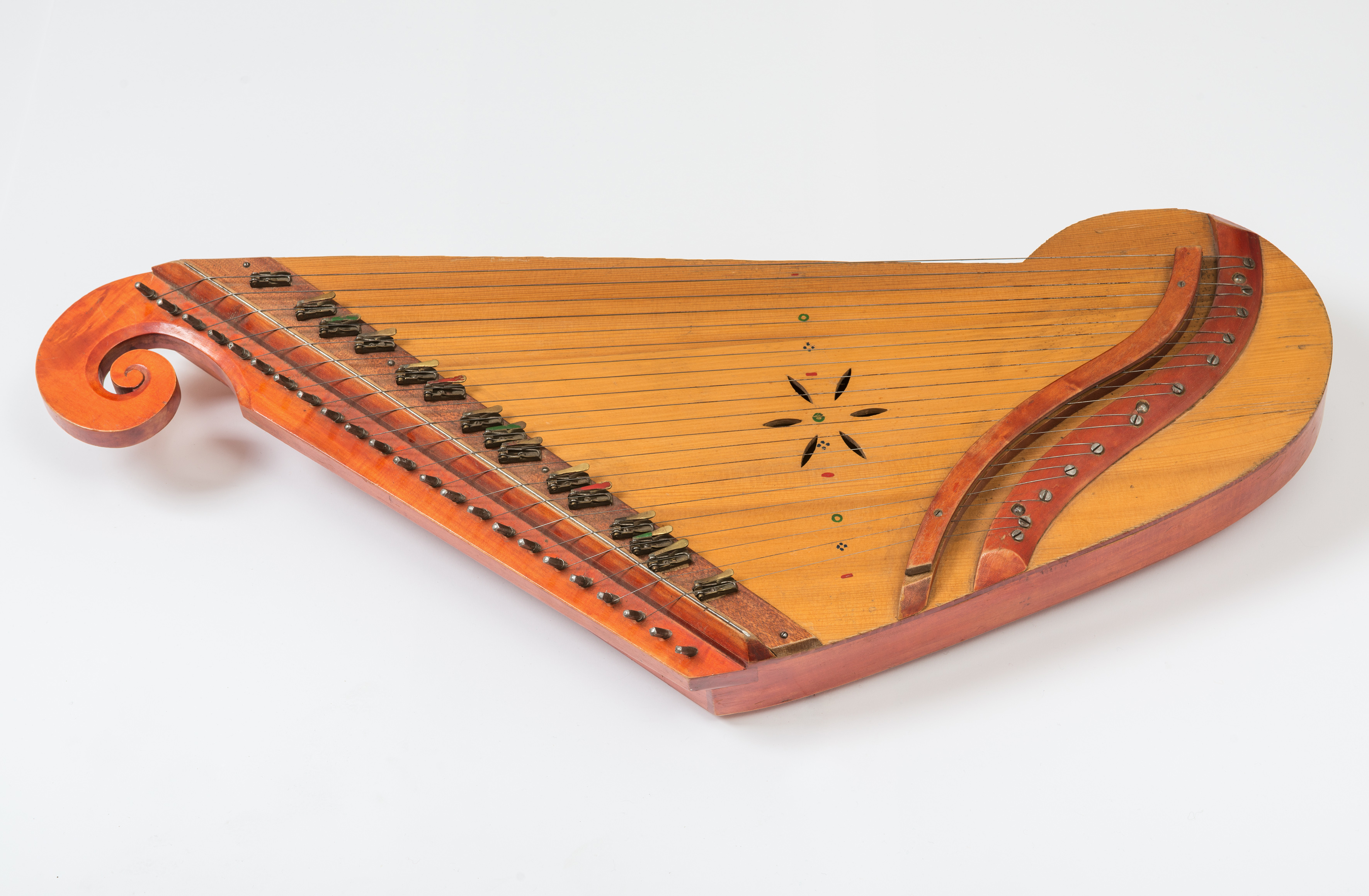 A concert kanklės, in a version no longer manufactured after 1954. Lithuanian Theatre, Music and Cinema Museum.
WAS THE LITHUANIAN SINGING REVOLUTION DIFFERENT FROM LATVIA AND ESTONIA?

The phenomenon did not take a coherent shape across the three Baltic states, and that possibly adds to the charm of it: there was no specific agreement among the three countries, but rather times were mature for a phenomenon like this to emerge spontaneously in more than one place with similar cultural background and political condition. Some events were organized in cooperation, but in general each country had its own way to the Singing Revolution, with something unique contributing to the whole phenomenon. Each country added a special significance to it.
As for Lithuania, one can certainly say that the specific role that music played in the process was particularly central, not just for the music itself, but also for the events organized and for the fact that several Lithuanian intellectuals and opinion-leaders of the period were in fact musicians or musicologists. 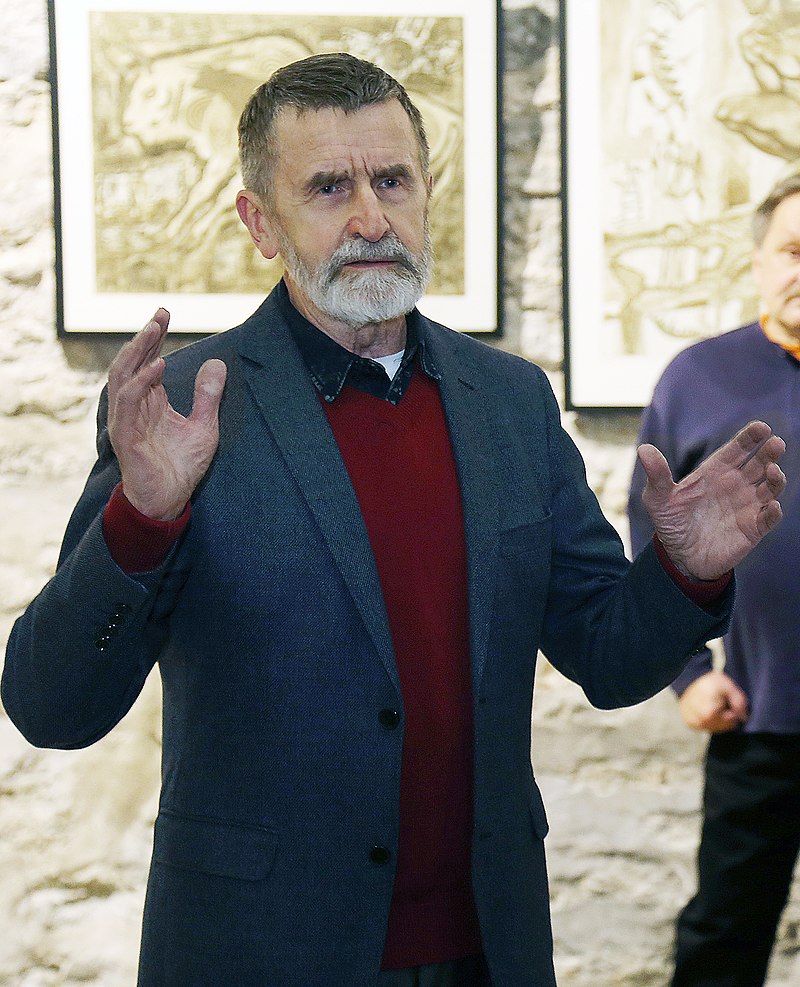 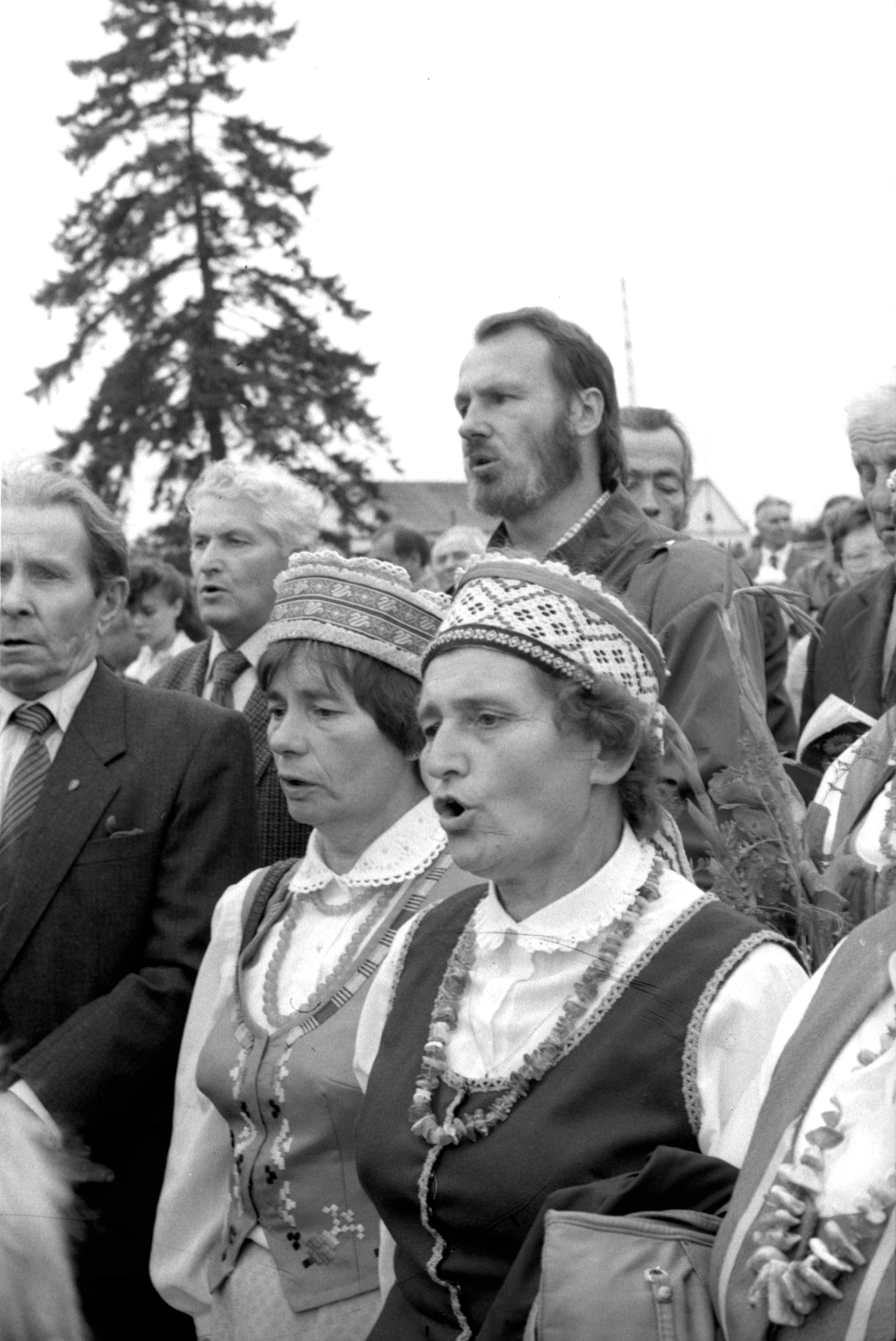 Members of the choir of the Exile Club of the Švenčionėliai Culture House sing during a celebration in memory of the post-war resistance. Švenčionys, August 25, 1990. Photographer Algimantas Cimbolaitis. Lithuanian Central State Archives. 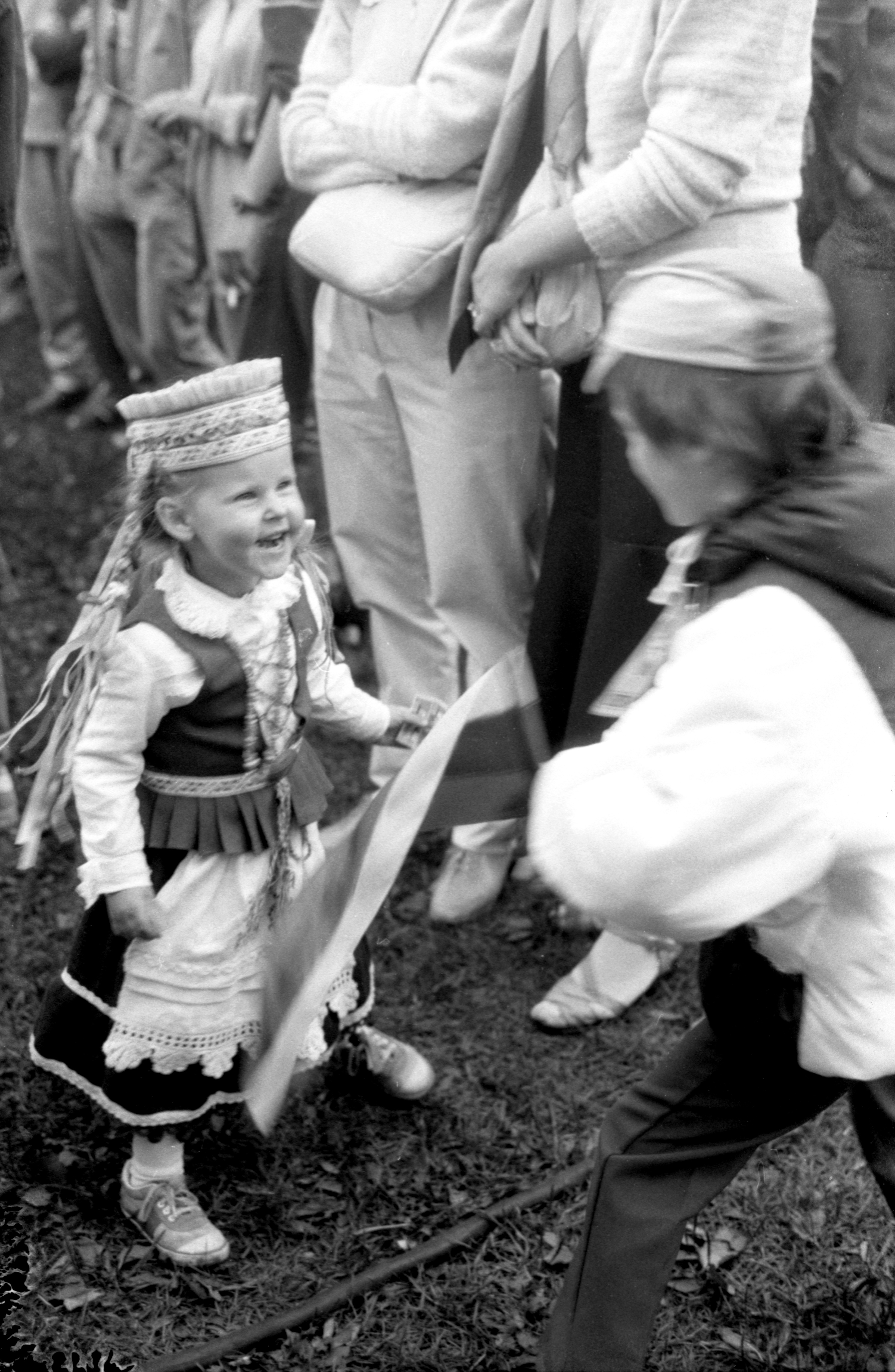 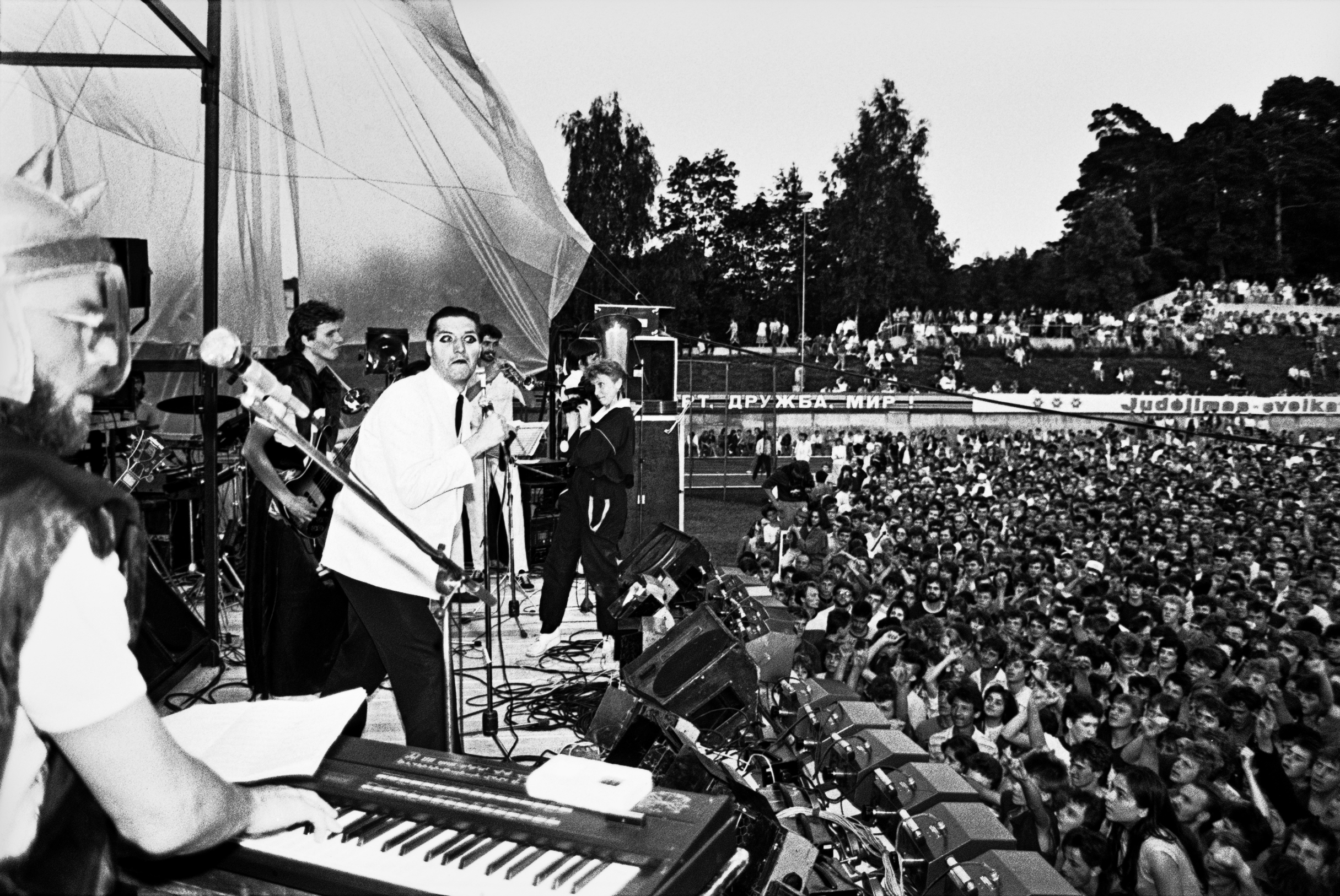 Antis on stage during the first edition of the “Rock March”. Vilnius, 1987. Photographer Raimondas Urbakavičius. National museum of Lithuania. 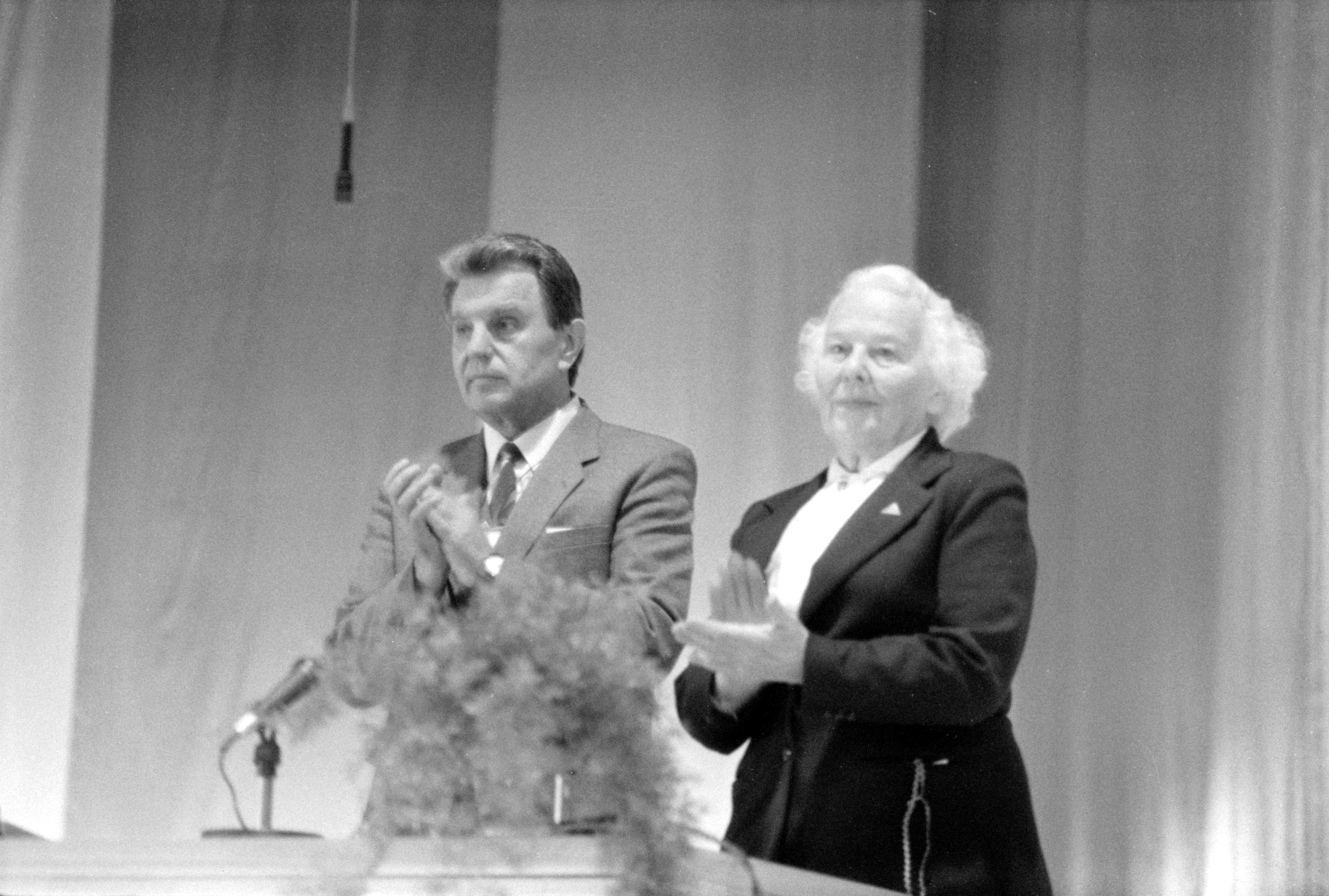 In the Baltic area, this period of independentist ardor took a rather peculiar guise. There was no place (nor objective possibility) for an “armed” resistance, this time. The main vehicle for political statements and protest became music, art, ideas, poetry and culture, and, quite aptly, the period became known as “The Singing Revolution”.
Conventionally covering the five years between 1987 and 1991, “Singing Revolution” designates all the events related to the independence movements in the Soviet Republics of the Baltic area: Estonia, Latvia and Lithuania. The term was coined by the Estonian activist and artist Heinz Valk, who employed this expression for the first time after the Tallinn Song Festival in 1988, as he noticed that the crowds had begun to spontaneously sing Estonian traditional songs – something that not long before would have been considered outrageous to the Soviet authorities.
Music, as well as other artistic and cultural manifestations, were during those years the main tools to convey independentist and patriotic messages. While there is no “official” beginning of the Singing Revolution, it is reasonable to say that in Lithuania the phenomenon started in July the 6th 1987, in the occasion of the first edition of an event called “Rock March”. 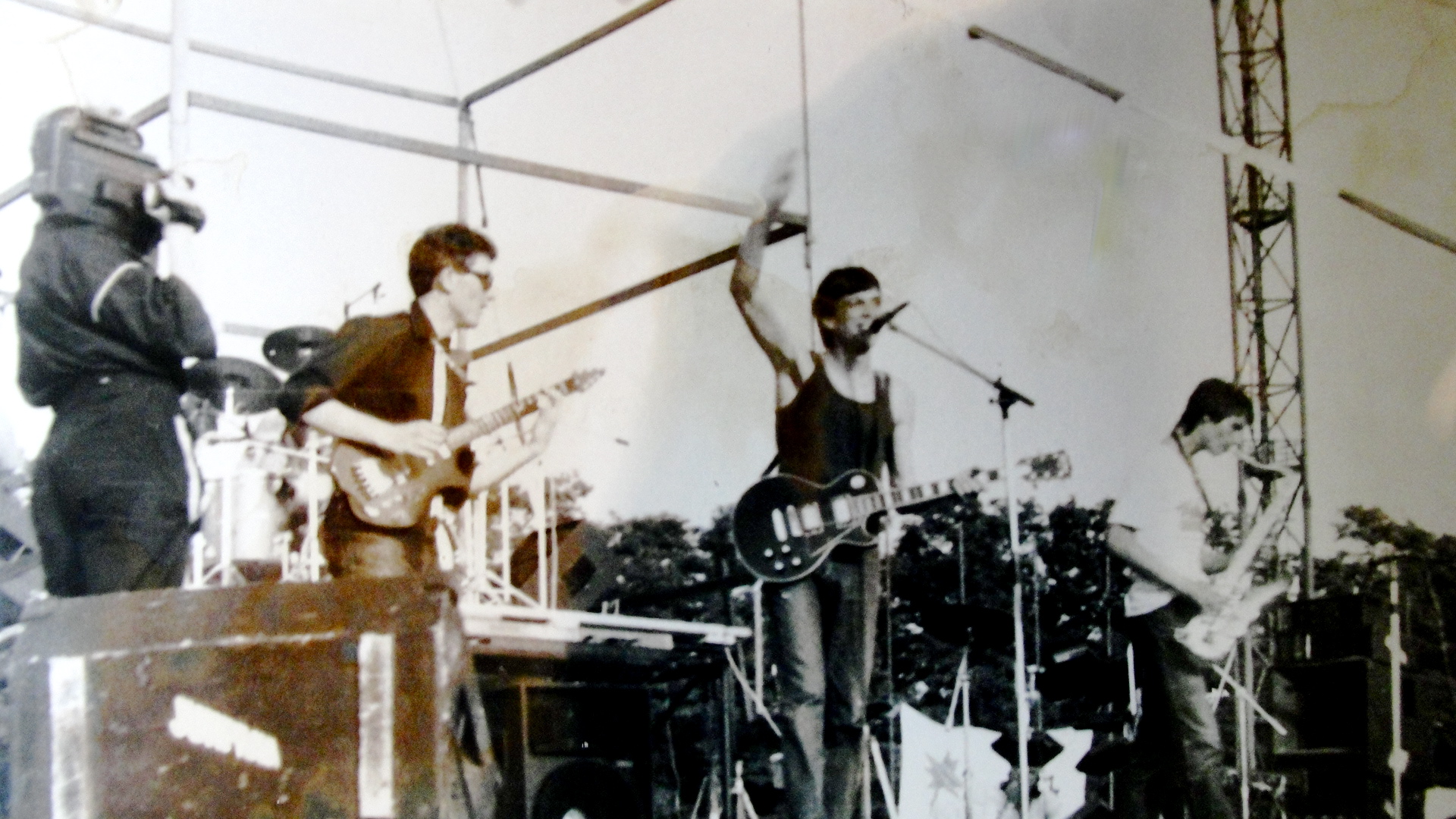 The Hilda Blues Band on stage, during the Kaunas leg of the first “Rock March”. Kaunas, 1987. Personal archive of Aleksas Bezginas.

A boy and the crowd. Šiauliai, 1987. Photographer Stasys Paškevičius. 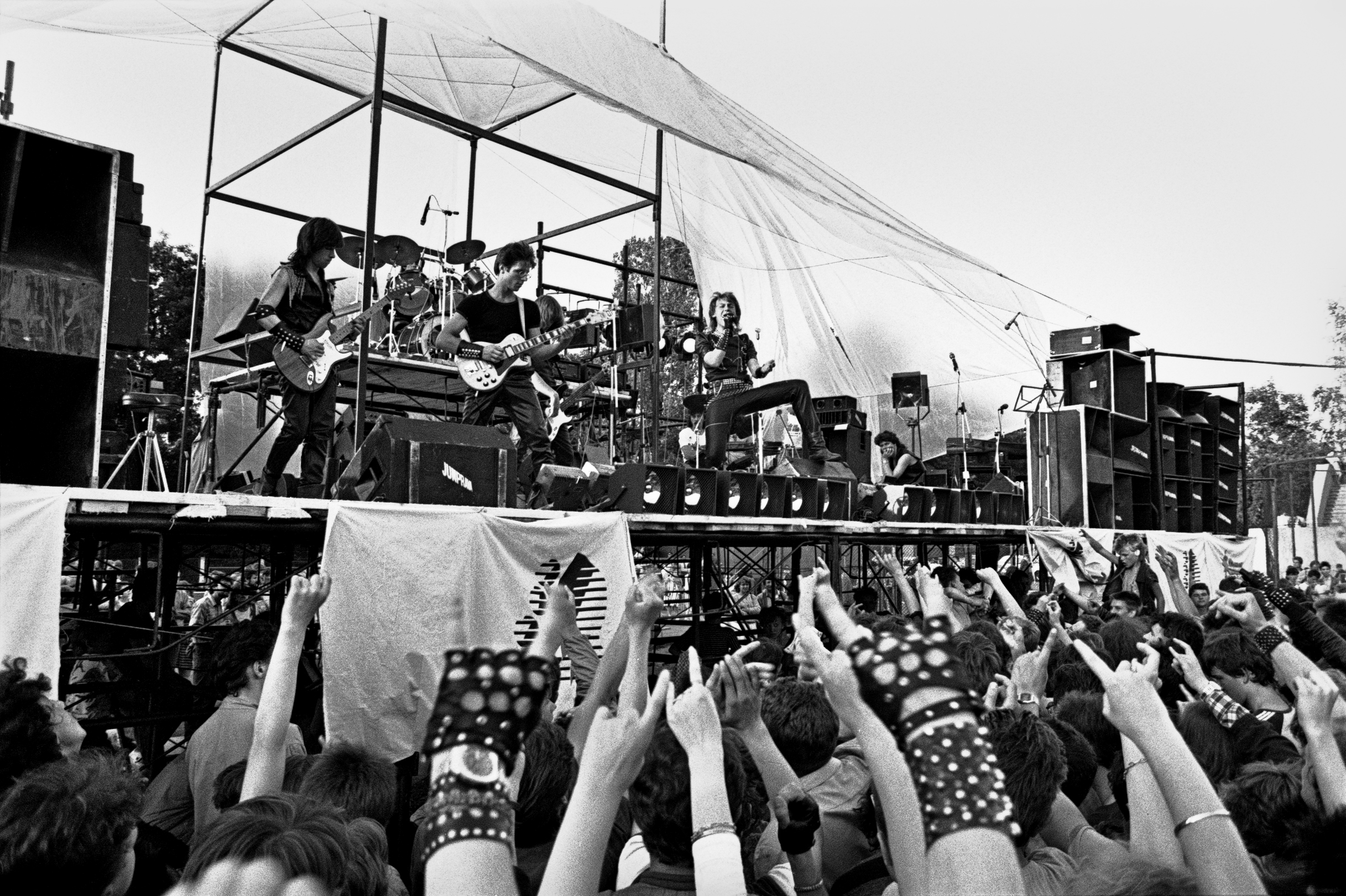 The band Katedra on the stage, during the Tauragė leg of the first “Rock March”. Tauragė, 1987. National museum of Lithuania.

Organized three years in a row, from 1987 to 1989 (and twice more in the mid 1990s, after the independence), the Rock March was a travelling show around the main cities of Lithuania, with different bands performing.
On the stages of the Rock March, the Lithuanian audience could be exposed to ”rebellious Western genres” like heavy metal (through the band Katedra), punk (through the bands Už Tėvynę and, in a more crossover way, Bix), synth-rock (through the band Fojė), straight blues (through the Hilda Blues Band), and others, including the eclectic pop of Antis.
Acts from Latvia and Estonia would also appear, showing once more that the three Baltic States were “together” in this enterprise. The bands were not only singing in their national language, but also sported the national flags, made political statements between one song and another, and in general displayed a fearless attitude towards the Soviet authorities.
This first edition started in Vilnius and continued in Kaunas, Tauragė, Kėdainiai, Šiauliai and Klaipėda. On the stage, the Lithuanian bands Antis (who were also the main organizers), Ad Libitum, Bix and Katedra, and the Latvian band Jumprava. Forcibly annexed to Soviet Union since 1940, Lithuania sees in the Perestroika and Glasnost processes an opportunity to achieve its independence.

WAS THE LITHUANIAN SINGING REVOLUTION DIFFERENT FROM LATVIA AND ESTONIA? 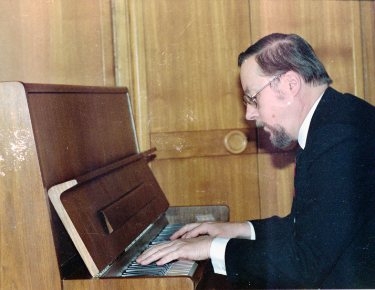 Despite many similarities with Latvia and Estonia, the Lithuanian Singing Revolution displays a particular focus on music. 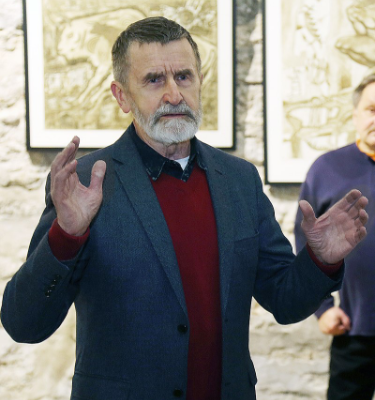 With the first edition of the “Rock March” touring concert, Lithuania inaugurates the five years of the Singing Revolution. 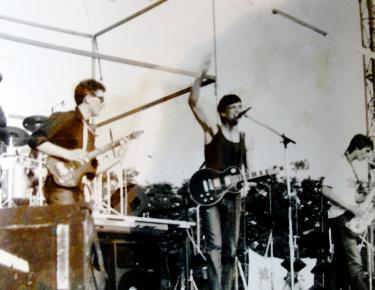 On July 6th, 1987, one Latvian and four Lithuanian bands give collective concerts around Lithuania, singing in their national language and playing rock music.